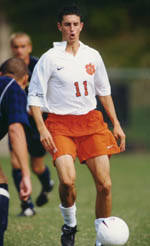 Clemson jumps to 8-2-1 on the season while Georgia State falls to 7-6 on the year.

Freshman Kenneth Cutler scored the first Tiger goal at the 11:42 mark in the first half. This was Cutler’s first career goal as a Tiger. He was double assisted by freshman Mark Lisi. Lisi would score what would prove to be the game-winner about half way through the first half. He sent a 26-yard shot off a restart into the net for his seventh goal of the year. Georgia State’s Matt Campion scored the lone State goal when he was assisted by Terrance Johnson and Brendon Minors just 19 seconds before the end of the first half. Fabio Tambosi would add the insurance goal at the 72:54 mark off an assist from Lewis and freshman Oguchi Onyewu.

The Tigers will return to action this Sunday, October 15, when Clemson will play host to the Virginia Cavaliers in a showdown of ACC-rivals. Game time is set for 2:00 p.m.