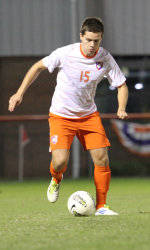 CLEMSON, SC – Brynjar Benediktsson and Iain Smith both scored goals in the second half in leading Clemson to a 2-1 win over Adelphi in a men’s intercollegiate soccer match at Historic Riggs Field Friday evening. With the win, Clemson improves to 5-8 overall, while Adelphi falls to 6-7-1 this season.

Adelphi scored first at the 25:37 point in the match. Steven Rivera scored for the Panthers when he fired a 25-yard shot that hit the right post and into the netting for his second goal of the season.

Clemson scored early in the second half in the 54th minute. Ara Amirkhanian played the ball to Austin Savage. Savage laid the ball back to Benediktsson who fired a shot from 22 yards out that goes into the netting for his team-leading sixth goal of the season.

The Tigers scored the game winner in the 72nd minute. Wes Nelson played the ball back to Jack Metcalf at the 18-yard box. Metcalf sent a diagonal crossing pass to Smith. Smith headed a shot into the goal from six yards out for his second tally of the season.

“It’s great to score goals but its better for the team to win the games,” said Clemson freshman Brynjar Benediktsson. “We have great coaches to help us improve and we just need to keep working hard.”

“Tonight’s match was a tale of two halves,” said Clemson Head Coach Mike Noonan. “We were lethargic in the first half and played better in the second half for 35 minutes as we scored two goals.

“We started to have good serves in the box and we got the result. Our injuries are starting to catch up with us. We are a beat-up team. I thought Cody Mizell made some great saves for us tonight. Brynjar Benediktsson settled us down and Austin Savage gave us some energy. I told the team last week you could have 1,000 excuses on why we can’t win, but there is no reason we can’t win the match. On a positive note, we matched our win total with last year’s and we still have a few matches left. We can still show improvement and obtain goals this season.”

Clemson will play at East Tennessee State on Monday before they return home to play host to Maryland on Friday night at 7:00 p.m.