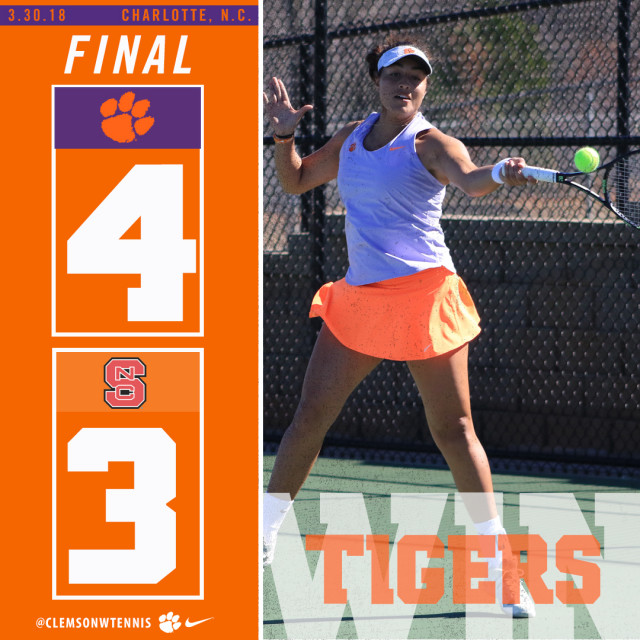 Clemson Comes from Behind for Thrilling Win over NC State Friday

CHARLOTTE, N.C. – The Clemson women’s tennis team trailed NC State 0-3 before Tiger singles players won four consecutive matches to earn the 4-3 come-from-behind victory over the Wolfpack on Friday afternoon at the Halton-Wagner Tennis Complex on the campus of UNC Charlotte. With the win, the Tigers improved to 9-9 (2-5 ACC), while the Wolfpack, ranked 46th nationally, dropped to 9-11 (2-5 ACC).

The Wolfpack won the doubles point, taking 6-2 victories at No. 3 and No. 2, in that order. The Tigers’ 34th-ranked duo of Marie-Alexandre Leduc and Fernanda Navarro led the Wolfpack’s 18th-ranked pair of Anna Rogers and Claudia Wiktorin 4-3 at the No. 1 spot when doubles play was halted.

It was the fourth time this season that Navarro has clinched the team win for the Tigers, and the second time against an ACC opponent. On Feb. 18, the junior from Guadalajara clinched Clemson’s 4-3 upset over then-11th-ranked Wake Forest with a win at No. 2 singles.

Clemson returns to action on Sunday, April 1 as it hosts Notre Dame at the AU Tennis Center in Anderson, S.C. First serve between the Tigers and Fighting Irish is scheduled for 12 p.m.