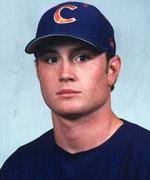 Clemson, SC- Clemson scored three runs in the eighth inning to put away Winthrop 9-5 in front of 2,325 fans at Doug Kingsmore Stadium on Tuesday evening. The game lasted three hours and twenty-two minutes and was played under chilly weather conditions. The win improved Clemson to 19-13, while Winthrop dropped to 19-14 on the season.

Kris Harvey improved to 6-0 on the season. Harvey gave up four runs in 5.2 innings pitched. He also played the game as the designated hitter, where he was 2-4 with two stolen bases and an RBI. Patrick Hogan earned his seventh save of the season, moving him into sole possession of fourth place in Clemson history with 15 career saves. Chase Edwards (2-2) suffered the loss for Winthrop after lasting just 1.2 innings.

Harvey, Herman Demmink, and Russell Triplett each had two hits for Clemson. Triplett drove in two runs for the Tigers. Daniel Carte and Bennett Stapf each had a pair of hits to lead the Eagles.

Winthrop took a 2-0 lead in the first without an RBI. Three Eagle batters walked, and Chris Carrara scored on a double play. Then, with runners at the corner, Winthrop executed a double steal. Clemson got one back in the bottom of the frame after Harvey hit an RBI double down the left field line.

The Tigers took a 4-2 lead after two innings of play. Tony Sipp was credited an RBI after beating out a double play ball at first base. Then, Garrick Evans grounded out to first base, plating another run. Demmink doubled to left center to bring in the third run of the inning. Triplett extended the lead to 5-2 with an RBI double in the third.

Both teams put a run on the board in the fourth. Chris Leroux hit an RBI single through the right side for Winthrop to cut the lead to 5-3. Clemson stretched it back to a three-run gap after Brad McCann hit a sharp RBI single up the middle. Winthrop cut the lead to 6-4 after Grant Neidenfeuhr hit a pinch hit, RBI single in the sixth.

Winthrop closed to within 6-5 after the seventh inning. Tommy Lentz floated a ball to left center field that dropped in for a base hit. His RBI single scored Daniel Carte from second base.

The Tigers closed the game out in the eighth inning. With the bases loaded, Daniel Pritchard laid down a perfect suicide squeeze bunt to the right side of the infield. Pritchard, who entered the game 0-10 in his career, got his first ever hit as a Tiger. Triplett followed with a sacrifice fly to left field, giving Clemson an 8-5 lead. Andy D’Alessio then scored on a walk to give Clemson a 9-5 lead.

Clemson scored three runs in the eighth off of Eagle reliever Chris Leroux, who entered the game having given up only one run, two hits, and four walks all season. Leroux walked four alone in the eighth inning, while also giving up two hits.

Clemson takes on South Carolina Wednesday night at Sarge Frye Field in Columbia. The Tigers will be looking to even the season series in the final regular-season meeting, as South Carolina holds a 2-1 lead. First pitch Wednesday is scheduled for 7:00 PM.