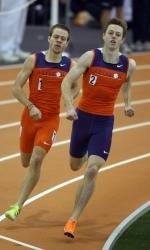 PHILADELPHIA – The Clemson women were third in the championship final of the 4x200m relay on Saturday at the 117th running of the Penn Relays at historic Franklin Field. The Tigers’ team of Marlena Wesh, Stormy Kendrick, Michaylin Golladay and Jasmine Edgerson produced a time of 1:33.62, but it was not enough to score an upset of three-time defending champion and race favorite Texas A&M, which went on to win a fourth straight title.

The men’s 4×2 also competed in Saturday’s championship final, placing seventh overall. The group of La’Mont Jackson, Jordan Rispress and Miller Moss posted a time of 1:25.49. The men’s 4x800m relay was seventh-fastest and second in their section of the collegiate final. The team of Jasen Turnbull, Chris Slate, Aaron Ramirez and Nathan Hendershot turned in a time of 7:29.50, but was edged at the finish line by Harvard’s relay.

Josh Fowler hit one legal mark in the triple jump. The red-shirt senior posted a jump of 46’4.25″ and placed 11th on Saturday.

The Tiger teams return to action next Saturday, May 7 for the Bob Pollock Spring Invitational at Rock Norman Track.