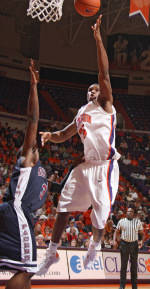 Clemson, S.C. (AP) – Trevor Booker had 16 points, 10 rebounds and five blocked shots, and No. 25 Clemson moved to 11-0 for the third time in four seasons with a 76-36 victory over North Florida on Tuesday night.

The Tigers are 49-0 under coach Oliver Purnell over the past four seasons in games played before Dec. 22.

Clemson (11-0) didn’t open this game like an undefeated team, struggling with winless North Florida (0-8) for a good part of the opening half.

Germaine Sparkes’ basket put the Ospreys up 13-12 about 8 minutes in and the game was tied 17-all after DeVon Jones scored on an easy basket.

That’s when the Tigers took control, outscoring the Ospreys 20-5 the rest of the half.

Terrence Oglesby got things going with a jumper, Demontez Stitt made three free throws and freshman Tanner Smith hit a 3-pointer to push the lead to 29-19.

Oglesby finished the burst right before halftime, making two free throws after a hard shot from Eni Cuka knocked him to the court.

North Florida was 2-of-8 from the field and had five turnovers during Clemson’s run.

Despite the lead, there wasn’t a lot of solid play to cheer about for the sparse post-semester crowd at Littlejohn Coliseum. One of the night’s loudest ovations came at halftime as Santa Claus handed out lollipops.

Stitt got the fans out of their seats early in the second half, the 6-foot-2 point guard dunking over 6-6 Stan Januska.

Booker’s flying slam 9 minutes later again had the fans up and gave the Tigers a 60-28 lead.

The biggest cheer, though, came only moments from the end when 7-2 freshman Catalin Baciu’s basket earned free tacos for the fans from a local fast-food chain.

Booker pretty much had his way with the smaller, slower Ospreys.

Kyle Groothuis had nine points and seven rebounds for the Ospreys, who shot 16 percent (4-of-25) in the second half.

Oglesby and Raymond Sykes added 10 points each for Clemson, which figures to face a sterner test Sunday to keep its streak going in its Atlantic Coast Conference opener at Miami.