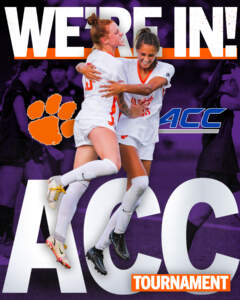 CHESTNUT HILL, Mass. – The Clemson women’s soccer team battled for a win at Boston College (7-10-1, 1-9 ACC) on Thursday night at Newton Campus Soccer Field. The match concluded the ACC regular season for Clemson (11-5-1, 6-3-1 ACC), who with the win clinched a spot in the six team ACC tournament.

The Tigers got off to a busy start as they recorded three goals in the first 20 minutes of the first half. Junior Caroline Conti started off strong as she buried the ball into the back of the net off a beautiful assist from Makenna Morris in the fourth minute. Less than three minutes later, Boston College found the equalizer and tied the match at one point a piece. Conti struck yet again in the 13th minute as Renee Guion put in a perfect ball off of a corner kick to Megan Bornkamp, who found Conti in the box to give the Tigers the lead yet again. Freshman Renee Lyles seized an opportunity of her own in the 20th minute as Conti found Maliah Morris on the wing, who laid in a ball to Lyles, giving the Tigers a 3-1 lead at the half.

Both teams fought for possession in the beginning of the second half until the 57th minute when Boston College was called for a handball in the box. Bornkamp converted her third successful penalty kick of the season and extended the Tigers’ lead and eventually sealed the 4-1 win.

“We are pleased to get the win here at Boston College,” said Head Coach Eddie Radwanski. “Boston College is not an easy place to play, and it is always a challenge. We needed the result, and the kids responded. We got some good goals, and it is nice to get the win and a spot in the ACC tournament. It was an outstanding performance tonight from the girls and specifically Caroline Conti who recorded two goals and an assist. We are back at it tomorrow and will see who we play in the first round on Sunday in a few hours.”

Next up, Clemson will travel to Notre Dame for a rematch with the Fighting Irish on Sunday. The game is set to kick off at 6 p.m. and slated to stream on ACC Network.