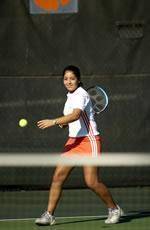 GREENVILLE, SC – Four Clemson women’s tennis players won their individual singles matches at the Furman Fall Classic in Greenville, SC on Friday afternoon. Both Tiger doubles teams also earned a victory in their first round contests. Saturday’s singles match-ups will begin at 11:00 AM and the flight three doubles third-place match will be played at 9:00 AM on the second day of competition.

Clemson’s Federica van Adrichem won her first collegiate match with a flight two, 6-1, 7-6(7) victory over Vanderbilt’s Amanda Taylor. She will face Lauren Osborne of Furman on Saturday at 11:00 AM in the second round of play. At flight three, junior Maria Brito defeated Nicole Beck of Wisconsin, 6-2, 3-6, 6-2, to advance to the winner’s bracket of the tournament. She will meet Tennessee’s Ghizela Schutte at 12:00 noon on Saturday. Sophomore Carol Salge was victorious in her flight four contest, claiming a 6-1, 6-4 decision over Laura Reichert of North Carolina. In her second-round match, she will face Furman’s Shannon Moore at 11:00 AM. Tiger newcomer Kathi Gerber also earned a win in day-one action, as she defeated Penn State’s Leyla Morzan at No. 6, 6-0, 7-5. Her match against Grace Blakely of South Carolina will begin at 11:00 AM on Saturday.

Senior Daniela Alvarez fell to Blakeley Griffith of Tennessee at the No.1 position, 6-4, 7-6(4). She will meet Furman’s Laura Gioia on Saturday at 11:00 AM in the consolation bracket. Gabrielle Solek-Tefft also suffered a loss for Clemson as she was defeated by Erin Jobe of Wisconsin in her flight seven match-up. She will take to the court at 1:00 PM against Penn State’s Dorothy Dohanies on Saturday.

In doubles action, Alvarez and van Adrichem defeated North Carolina’s team of Smith and Fanjoy at flight one in the opening round of play, 8-6, but fell in the second round to Schutte and Schaub of Tennessee, 8-3. The Tiger duo will vie for third-place on Sunday at 9:00 AM. In the flight three bracket, Brito and Salge won their first match over Ulery and Yahnar of Vanderbilt, 8-4, but were defeated by the Tar Heel tandem of Jurewitz and Harris in the second round, 8-6. They will compete for a third-place finish on Saturday at 9:00 AM.