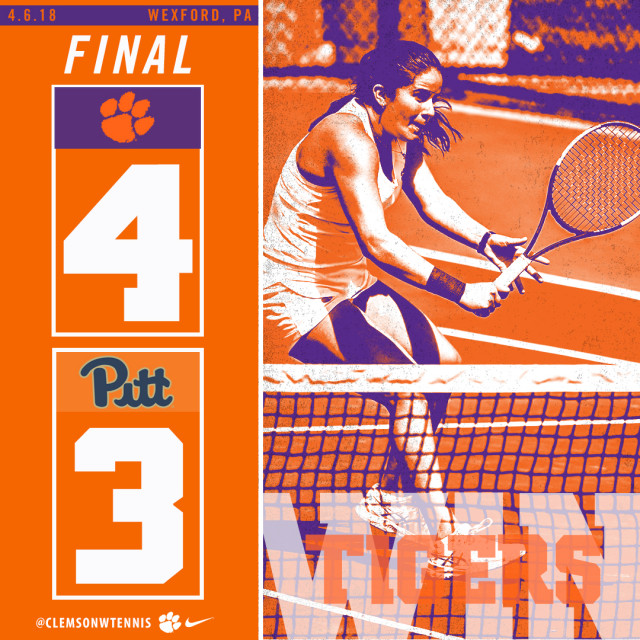 WEXFORD, Pa. – The Clemson women’s tennis team won its third-straight ACC match on Friday, defeating Pittsburgh by a score of 4-3 indoors at the Oxford Athletic Club in Wexford, Pa. With the win, the Tigers improved to 11-9 (4-5 ACC), while the Panthers dropped to 6-11 (0-10 ACC).

Pittsburgh won the doubles point, winning matches on Courts 2 and 3, in that order, to take a 1-0 lead.

Tate Schroeder quickly put the Tigers on the board in singles play, defeating her opponent at No. 3 in straight sets, 6-0, 6-3. Fernanda Navarro followed Schroeder with a 6-4, 6-2 win at No. 2, collecting her fifth-consecutive win in singles play. After the Panthers won on Court 4, 21st-ranked Marie-Alexandre Leduc came from behind after dropping the first set to win, 4-6, 6-0, 6-2, at No. 1 singles, also her fifth-straight win. Senior captain Daniela Ruiz clinched the team victory for the Tigers at No. 6 with a convincing win in the third set, 7-6, 4-6, 6-1. The win was the fifth-straight singles victory for Ruiz as well.

The Tigers remain on the road for one more match, as they head south to Durham, N.C. to face third-ranked Duke on Sunday, April 8. The match between Clemson and the Blue Devils is scheduled for 2 p.m. at Ambler Tennis Stadium.