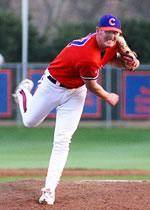 Clemson, SC- Clemson scored 11 unanswered runs on its way to a 13-4 victory over The Citadel on Tuesday night at Doug Kingsmore Stadium. The win was the 10th straight home victory for the #17 Tigers. The win improved Clemson to 23-14 overall, while The Citadel fell to 23-14 with the loss.

Jeff Hahn (2-0) earned the win after scattering four hits over 5.0 innings pitched. Hahn got the Bulldogs to ground out into double plays on four occasions. Hahn gave up no runs in the contest. Griff Beckham (1-2) suffered the loss.

The starting pitching was shaky in the first inning. The Citadel jumped on Harvey early. With one out and two on, Bulldog first baseman Chip Cannon hit a triple down the right field line and into the corner. The triple was his first of the season. His two RBIs gave him 45 for the season and The Citadel a 2-0 lead. Cannon scored moments later after Jon Aughey hit a sacrifice fly to centerfield.

Harvey helped his own cause with a solo homer in the bottom of the frame, a deep shot to left field, his sixth of the season. Following a double by McCann, catcher Lou Santangelo slapped a single to right center to bring the Tigers within 3-2.

Cannon extended the Bulldog lead to 4-2 after an opposite field homer to left field. For Cannon, it was his 14th home run of the season. The Tigers got one back in the fourth, as Andy D’Alessio grounded out to first with the bases loaded. However, two were left on by Clemson in the inning.

The Citadel threatened in the fifth, but Clemson got a double play on a fly ball to centerfield. Then, with two out and one on, Hahn picked off Aughey at first base.

Clemson capitalized in the bottom of the fifth. McCann hit his ninth home run of the year on a hanging curve ball, scoring Herman Demmink from second. Santangelo plated the third run of the inning after a Bulldog error. Then, following a double by Triplett, left fielder Tyler Colvin hit a curve ball up the middle for two RBIs. The five-run inning gave Clemson an 8-4 lead.

The Tigers added the final three runs in the sixth, only one of which was earned. The Bulldogs committed two errors after Santangelo hit a ground ball to second base. An errant throw to first allowed Harvey to score. John Ingram then had a pinch hit single to left field to score two more runs.