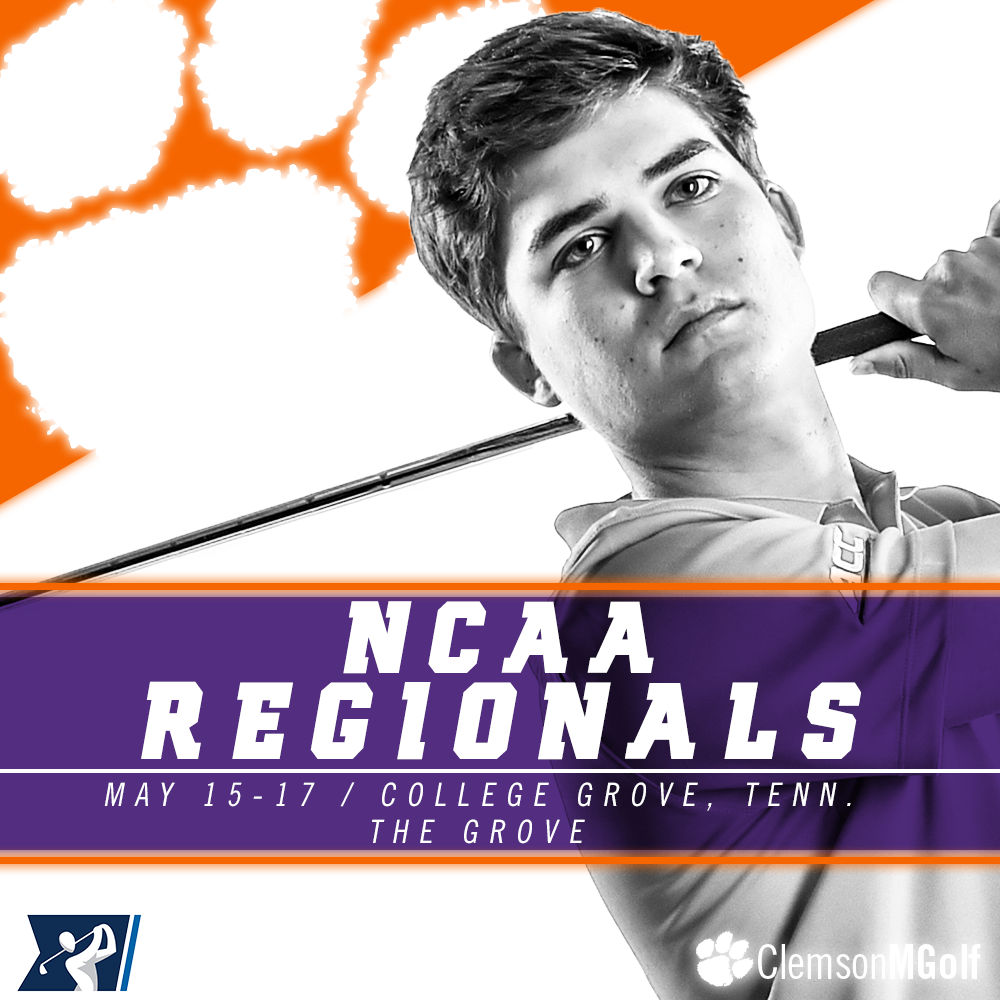 Clemson, S.C.—Clemson will begin play in the 2017 College Grove Regional in Murfreesboro, Tenn. on Monday morning. The Tigers are seeded third in the 13-team regional.   The top five teams in the tournament at the conclusion of 54 holes on Wednesday will advance to the NCAA Championships in Sugar Grove, Illinois on May 26.

The Tigers will be paired with No. 1 seed Vanderbilt and No. 2 seed Texas Tech for the first round on the par 72 course that is 7383 yards in length. The first Tiger player on the course will be Austin Langdale at 9 a.m. Eastern time, 8: 00 a.m. in Murfreesboro.

This is Clemson’s 36th straight year in the NCAA Tournament, the 34th in a row under head coach Larry Penley. Penley has the longest running streak of NCAA appearances among active coaches and Clemson’s 36-year program streak is second behind Oklahoma State. Penley has won seven NCAA Regional tournaments, more than any other coach.

Clemson enters the NCAA Tournament having won a school record tying and national leading six tournaments this academic year, including four in the spring. The Tigers finished second in the other two spring events, including the ACC Tournament April 21-22 in the most recent outing.

Penley has three golfers with under a 71.00 stroke average so far this year, a first in school history. All three were named All-ACC last week. Doc Redman is a freshman from Raleigh, N.C. with a 70.36 average, on pace to be the second best in Clemson history behind D.J. Trahan’s 70.33 in 2001-02. The ACC Freshman of the Year has a Clemson freshman record seven top 10 finishes, including two victories.

Carson Young graduated from Clemson on May 11 and is from Pendleton. He has a 70.85 stroke average, the best of his career, and he has five top 10 finishes, all in the spring when he has recorded 14 under-par rounds. He won the Furman Invitational in March. He has a top 10 finish at a regional on his resume as he finished sixth at the 2014 regional in Sugar Grove, Ill.

Bryson Nimmer has a 70.94 stroke average and is coming off a tie for first at the end of regulation play at the ACC Tournament two weeks ago. He did not win the four-player playoff, but has six top 10 finishes this year.   He has 16 under-par rounds this year.

Senior Austin Langdale has played just six tournaments this year due to injury, but he is expected back for the NCAA Tournament. Langdale was an honorable mention All-American last year. A veteran of five NCAA regional and national tournament appearances, Langdale has a 72.06 average this year with a pair of top 10 finishes.

Freshman William Nottingham rounds out the Clemson lineup with a 72.85 average. He had a school record score of 62 at the Wolfpack Spring Open in April and had a top 10 finish at the ACC Tournament.