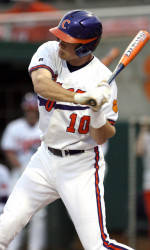 Notes Clemson, ranked as high as #20 in the nation, went 4-1 in five games this past week, which included two wins in two games over Elon at Doug Kingsmore Stadium and two wins in three games at Boston College over the weekend. The Tigers won two one-run games and two two-run games. The wins over Elon (Tuesday) and Boston College (Saturday) all came in doubleheaders. It was the first time since 1999 that Clemson swept two doubleheaders in a single week.

Clemson defeated Elon twice by a combined score of 13-10 in a doubleheader at Doug Kingsmore Stadium on March 24. Clemson outhit Elon .388 to .333, led by five hits by Mike Freeman and Brad Miller. The Tiger pitching staff had a 4.00 ERA and totaled 15 strikeouts against only three walks.

In the first game of the doubleheader, Miller and Freeman totaled three hits apiece to lead Clemson to a 5-3 win over Elon. The Tigers totaled 13 hits, while the Phoenix tallied 14 hits. John Nester’s two-run, opposite-field homer in the eighth inning gave the Tigers a three-run lead. Clemson was aided by three sacrifice bunts as well. Clinton McKinney pitched 3.0 scoreless innings in relief of two-hit ball with three strikeouts to earn the win. Matt Vaughn recorded the final three outs to earn the save.

In the second game of the doubleheader, Clemson outlasted Elon 8-7. Chris Epps’ three-run homer in the second inning tied the score, then Clemson scored two runs in the fifth inning to take a 7-6 lead. The Tigers surrendered a run in the ninth inning, but they hung on for the one-run win with the potential tying run on second base when the game ended. Four Tigers had multi-hit games, while Epps totaled a team-high four RBIs for Clemson, who had 13 hits in the game. Pat Irvine and Mike Melillo hit two home runs apiece for Elon, who totaled 11 hits. Craig Gullickson pitched 3.0 solid innings in relief with three strikeouts to earn the win, while Tomas Cruz recorded the save.

Clemson won two of three games against Boston College at Eddie Pellagrini Diamond on March 27,28. The Tigers hit .284 with four doubles, two triples, and four homers. Ben Paulsen went 6-for-10 with four runs, two triples, one homer, five RBIs, and three walks. Miller added five hits and four RBIs. The Tiger pitching staff had a 7.62 ERA, but they had saves in both of their wins. Clemson committed just one error, while the Eagles were errorless in the series.

In game-one on March 27, Mike Belfiore hit two homers with seven RBIs to lead Boston College to a 13-1 win over Clemson. Belfiore hit a grand slam in the first inning and three-run homer in the second inning, as the Eagles scored four runs apiece in the first, second, and sixth innings. Tony Sanchez added a three-run homer in the sixth inning. Eleven of Boston College’s 13 runs came on its four home runs. J.B. MacDonald pitched 8.0 strong innings of five-hit ball to earn the win. Clemson totaled seven hits by seven different players and left 10 runners on base against only two by the Eagles.

In game-two on March 28, which was the first game of a doubleheader, Clemson hit four home runs and held on for a 7-6 win over Boston College. All seven Tiger runs came on long balls, the first three of which were all two-out, two-run homers. Paulsen, Miller, Jeff Schaus, and Casey Harman pitched 7.0 innings, allowing seven hits, five runs, and one walk with nine strikeouts to earn the victory, while Cruz pitched the final 2.0 innings to record the save. Belfiore hit two of the Eagles’ three home runs as well.

In game-three on March 28, which was the second game of a doubleheader, Paulsen went 4-for-4 with three RBIs to lead Clemson to a 5-3 victory over Boston College. Paulsen also hit a triple, scored a run, and had a walk, while his two-run single in the ninth inning proved to be the difference in the game. Will Lamb added two hits and two runs, while Miller had two hits and two RBIs for Clemson, who had 13 hits. Starter Graham Stoneburner pitched 8.1 effective innings, allowing three runs on nine hits to earn the win. Vaughn retired the only two batters he faced with the potential tying run on first base to record the save.

During the week, the Tigers hit .324 with a .489 slugging percentage and .385 on-base percentage. The offense also produced seven doubles, two triples, and six home runs. The pitching staff had four saves, a 6.14 ERA, and .326 opponents’ batting average along with 36 strikeouts against 11 walks.

Paulsen led Clemson by going 9-for-15 (.600) with five runs, one double, two triples, one homer, six RBIs, a 1.133 slugging percentage, five walks, one hit-by-pitch, a .714 on-base percentage, one sacrifice bunt, and no errors in 46 chances in the field in five games this past week. Miller was 10-for-23 (.435) with a homer and five RBIs and Freeman added eight hits. Both Cruz and Vaughn recorded two saves apiece as well.

The Tigers sport an 18-7 overall record and 7-5 ACC mark on the season, good for second place in the Atlantic Division behind Florida State (6-4). Three of their four ACC series have been played on the road, trips to North Carolina, Florida State, and Boston College. The Tigers will play five of their next six weekend series at home, including four of their next five ACC series at home.

Clemson is hitting .284 with a .426 slugging percentage and .379 on-base percentage along with 37 stolen bases in 48 attempts in 25 games this season. The Tigers have also totaled 40 doubles, six triples, and 23 home runs.

The Tigers will play a home-and-home midweek series against Georgia, beginning Tuesday night in Athens, before playing host to Duke in a three-game series at Doug Kingsmore Stadium over the weekend.