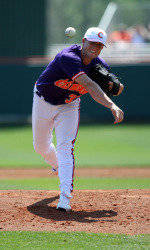 Last Week’s Game Notes Clemson went 3-1 in four games this past week. The Tigers defeated Georgia on the road 5-2 before winning two of three games at home over Wake Forest.

The Tiger pitching staff had a 2.75 ERA and .234 opponents’ batting average on the week. The staff also allowed only six extra-base hits and 12 walks with 36 strikeouts in 36.0 innings pitched. In 3.0 innings pitched over three relief appearances, Scott Weismann picked up two saves and allowed just one hit, no runs, and no walks with five strikeouts.

Miller hit a three-run homer in the first inning and Justin Sarratt tossed 6.0 solid innings to lead Clemson to a 5-2 win over Georgia at Foley Field on April 20. Miller went 2-for-3 to lead Clemson’s eight-hit attack. Sarratt allowed just six hits, one run, and no walks with three strikeouts to earn the victory. Four other Tiger hurlers combined to allow no earned runs in the final 3.0 innings to close out the game. Weismann struck out the only batter he faced to record the save. The five Clemson pitchers combined to yield one earned run and no walks with seven strikeouts.

Clemson then won two of three games over Wake Forest by a combined score of 15-13 at Doug Kingsmore Stadium from April 22-24. Clemson outhit the Demon Deacons .276 to .223 and totaled eight doubles, one homer, and seven steals. Miller went 5-for-12 with four runs and three steals, while Jeff Schaus added two doubles and four RBIs. The Tiger pitching staff had a 3.33 ERA, as Weismann allowed one hit, no runs, and no walks with four strikeouts in 2.2 innings pitched over two relief outings.

In game-one on April 22, Will Lamb’s run-scoring double. Leone earned the win, while Weismann struck out both batters he faced to record the save. The two pitchers combined for 12 strikeouts, faced just five batters over the minimum, and did not allow a runner past second base. Miller went 2-for-4 with a run and three steals for Clemson, who totaled six hits (four doubles, two singles).

In game-two on April 23, Tim Cooney pitched a complete game to lead Wake Forest to a 9-3 win over Clemson. Cooney scattered nine hits, two earned runs, and no walks with seven strikeouts to earn the win. The Demon Deacons broke a 1-1 tie with three two-out runs in the third inning and added runs in the fifth, sixth, seventh, and eighth innings to pull away. Wake Forest totaled 12 hits and five stolen bases. The Demon Deacons also put their leadoff batter on base seven times and took advantage of three Clemson errors. Pohl had a team-high two hits to pace the Tigers.

In game-three on April 21, Clemson broke a 3-3 tie with five runs in the fifth inning on its way to a 10-4 win over Wake Forest. Spencer Kieboom hit his first career home run in the second inning to tie the score. The Tigers used two hits, three walks, and two errors in the fifth inning to score five runs, highlighted by Schaus’ two-run single. Schaus went 2-for-4 with a double, three RBIs, and a steal to lead Clemson, who outhit the Demon Deacons 12-6. Richie Shaffer went 2-for-3 with a double, two RBIs, two runs, a walk, and steal. Starter Jonathan Meyer allowed just four hits, three runs, and one walk with seven strikeouts to earn the victory.

Scott Weismann has also settled into his role as a reliever. He is 3-4 with a 5.79 ERA overall in 2011, but in 6.0 innings pitched in his last five outings, all in relief, he has allowed only two hits, no runs, and no walks with 11 strikeouts along with two saves.

Clemson will play five games next week, including four at home. The Tigers will host Furman on Tuesday night, then travel to Cullowhee, NC to take on Western Carolina on Wednesday night. Then over the weekend, Georgia Tech will visit Tigertown for a three-game series at Doug Kingsmore Stadium.