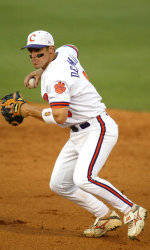 Notes Clemson has a 10-3 overall record after going 3-1 in four games last week. On Wednesday, Clemson defeated William & Mary 10-5 thanks to an eight-run eighth inning. Then over the weekend, Clemson won two of three games over #25 Kansas.

On Friday, Josh Cribb pitched 7.0 innings, throwing only 69 pitches in a masterful performance in Clemson’s 7-2 victory. He allowed only one hit (a single), no runs, and two walks with four strikeouts. He did not allow a Jayhawk to advance past first base the entire game and retired 14 straight batters at one point.

On Saturday, Kansas outhit the Tigers 11-7 and held on for a 6-5 win after giving up four unearned runs in the first inning. Tiger pitchers struck out 15 batters in the game, but the batters were only 1-for-10 with runners in scoring position.

On Sunday, Clemson scored two runs on two different wild pitches in the eighth inning and held on for a 4-3 win over the Jayhawks. After totaling 11 hits and only scoring two runs in the first seven innings, the Tigers scored two runs without a hit in the eighth. Stephen Faris tied his career high with 10 strikeouts in 7.0 innings pitched. The Tigers outhit Kansas 11-4, as Herman Demmink was 3-for-3 with a walk and two RBIs. The win was Head Coach Jack Leggett’s 150th over a top-25 ranked team in his 13th season at Clemson.

The pitching staff has a 1.86 ERA with a .200 opponents’ batting average. In three games against Kansas, the staff recorded 32 strikeouts, including 28 in the final two games. Cribb is 4-0 in three starts and one relief appearance, and has an 0.96 ERA. In 18.2 innings pitched, he has allowed just nine hits (.143 opponents’ batting average), three runs (two earned), and four walks with 14 strikeouts.

Clemson will play host to Gardner-Webb on Wednesday night before traveling to Virginia in its first ACC series of 2006 over the weekend.