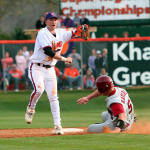 NotesClemson has a 7-2 overall record after going 2-1 in three games last week. The Tigers downed College of Charleston on Friday in Mount Pleasant, SC by a score of 6-0, as P.J. Zocchi had his best outing as a Tiger, allowing five hits in 6.0 innings pitched to earn the win. Travis Storrer and Andy D’Alessio each hit long balls. The record crowd of 3,122 fans at Patriots Point field had a vast majority of Tiger fans.

The Tigers split two games in a home-and-home series with #9 South Carolina, as each team won on its home field. The Gamecocks took down the Tigers 6-2 on Saturday behind the right arm of reliever Andrew Cruse, who shut down the Tiger bats in the final 5.2 innings pitched.

Clemson evened the four-game season series with a 6-4 come-from-behind win on Sunday over the Gamecocks on Head Coach Marquez Smith’s two-run single in the seventh inning gave the Tigers the lead for good.

Clemson trailed 4-3 during the “seventh-inning stretch,” and the first two batters were retired in the seventh. But a two-out rally, which included a bases-loaded walk by Travis Storrer on a full-count pitch and Smith’s single, led the Tigers to victory. Taylor Harbin went 3-for-4 with a double in both games against the Gamecocks in his second and third games back from his hamstring strain that caused him to miss the previous five games.

While the bats have yet to heat up, the pitching staff has continued to be solid with a 1.46 ERA and .199 opponents’ batting average. Daniel Moskos has become one of the team’s top relievers, as he sports a 0.91 ERA in 10.0 innings pitched (including a .167 opponents’ batting average). Steve Richard also has both of Clemson’s saves. Clemson has a .977 fielding percentage and has turned 12 double plays.

The Tigers entered the week ranked #1 in two of the three major polls. Clemson, who is 7-2, has played a tough schedule so far, as evidenced by the fact that its opponents have stellar records up to this point in the season. Clemson opened the season with a three-game sweep of James Madison. The Dukes now sport a 7-4 overall record, meaning they are 7-1 in games against teams other than Clemson. The Tigers outscored James Madison 17-2 in the three games against the same team that outscored Wagner 73-8 in three games this past weekend.

Clemson won two of three games over Mercer, while Mercer now has a 10-7 record, meaning the Bears are 9-5 against other teams. College of Charleston is 10-3, including a 10-2 record in other games, and South Carolina is 9-2, including 8-1 in games other than Clemson. Therefore if one were to multiply each game Clemson has played by its opponents current record in games against teams other than the Tigers, their combined record is 74-22 (which is similar to how the RPI strength of schedule is determined).

Clemson will play a home game against William & Mary on Wednesday before playing host to Kansas, who has won seven straight games and sports a 13-4 record while playing a very difficult early schedule, which has included just three games at home. The first of three games against Kansas is scheduled for 4:00 PM on Friday.