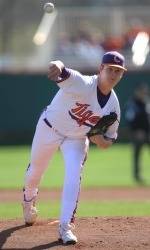 The Series Clemson and UAB have never met on the diamond.

The Starting Pitchers In game-one, UAB will start senior righthander Dillon Napoleon on the mound. The Winnetka, IL native had a 5-3 record and 2.87 ERA in 13 starts for a total of 84.2 innings pitched in 2011. He gave up 70 hits (.230 opponents’ batting average) and 26 walks with 56 strikeouts.

The Tigers will counter junior righthander Kevin Brady on Friday. The Gaithersburg, MD native had a 2-0 record and 3.86 ERA in 10 appearances (three starts) for a total of 23.1 innings pitched in 2011. He allowed 19 hits (.218 opponents’ batting average) and one walk with 33 strikeouts.

The Blazers’ starter for game-three has yet to be determined.

The Tigers will start senior righthander David Haselden on Sunday. The Spartanburg, SC native had a 6-1 record and 2.23 ERA in 25 appearances (four starts) for a total of 76.2 innings pitched. He gave up 65 hits (.236 opponents’ batting average) and 14 walks with 49 strikeouts.

The Blazers UAB, led by sixth-year Head Coach Brian Shoop, is a member of Conference USA and like the Tigers will play its first game on Friday. The Eagles are coming off a 29-28 season, which included a 9-15 record in Conference USA.

The Blazers return 16 lettermen and six position starters along with 13 of their 18 pitchers from a season ago. Senior infielder Patrick Palmeiro is among the top returning players. The son of former Major League great Rafael Palmeiro batted .284 with 16 doubles, eight homers, and 43 RBIs in 2011. Senior righthander Ryan Nance, who had a team-high eight saves in 2011, also returns in 2012.

The Tigers Clemson enters the season-opening series against UAB ranked as high as #16 in the nation (by Baseball America). Clemson is also ranked #23 in the Sports Weekly preseason poll and #25 in the Collegiate Baseball preseason poll. The Tigers are coming off a 43-20 season in 2011 when they hosted the Clemson Regional.

The Tigers return four position starters in 2012 and 20 lettermen overall. Among the top returnees are junior infielder Richie Shaffer, who batted .315 with 13 homers and 55 RBIs in 2011. Senior utility player Phil Pohl hit .333 with a team-high 22 doubles, while Jason Stolz batted .285 with a team-high 10 sacrifice bunts.

Worth Noting  Nine of Clemson’s first 13 games of the season will be against teams that played in the 2011 NCAA Tournament.  Clemson has scored at least one run in 43 straight games.

Behind Clemson and Florida State in the ACC Atlantic Division predictions were N.C. State, Wake Forest, Maryland, and Boston College.

Polls Clemson enters the 2012 season ranked #16 in the Baseball America preseason rankings. The Tigers are also ranked #23 in the Sports Weekly preseason poll and #25 in the Collegiate Baseball preseason poll. It is the 24th consecutive season that Clemson has had at least one preseason top-25 ranking.

Leggett Leading a Consistent Winner Head Coach Jack Leggett has an 812-376-1 (.683) record at Clemson in his 19th season. The late Bill Wilhelm has the most wins of any Tiger coach with 1,161 in 36 seasons (1958-93) at Clemson. Leggett’s 812 wins are second-most in school history. No other Clemson coach has more than 70 wins while in Tigertown. Leggett earned win #800 as the leader of the Tiger program in Clemson’s 12-0 victory over Gardner-Webb in the second game of a doubleheader on May 7, 2011.

Through Leggett’s first 18 seasons at Clemson, he had 812 wins. Only five other programs (Florida State, Wichita State, Rice, Cal State Fullerton, Miami (FL)) had more wins over that span from 1994-11.

Leggett 15th on All-Time NCAA Wins ListJack Leggett has 1,189 career wins in 32 seasons as a head coach. That victory total is 15th on the all-time NCAA Division I list. Leggett passed the late Bill Wilhelm, who is tied for 18th place with 1,161 wins in 36 seasons (1958-93) as Clemson’s head coach, on April 6, 2011 in the Tigers’ 12-3 win over Western Carolina. Leggett is also sixth in wins among active coaches.

Haselden in Control Senior righthander David Haselden (Spartanburg, SC) has been both a starter and reliever in his four seasons at Clemson. In both cases, he has shown outstanding control, as he is in the top 10 in Tiger history in career strikeout-to-walk ratio and career walks per nine innings pitched.

In 135.1 innings pitched over 54 appearances (seven starts) in his career, he is 11-5 with five saves, a 3.26 ERA and 94 strikeouts against only 28 walks. His 3.36 strikeout-to-walk ratio is sixth-best in school history, while his 1.86 walks per nine innings pitched mark is second-best.

Four Tigers Share Captain Title Four Tigers were selected as team captains, as voted on by the players, prior to the 2012 season. Junior righthander Dominic Leone, senior utility player Phil Pohl, junior infielder Richie Shaffer, and senior infielder Jason Stolz were all named captains. Pohl was a captain in 2011 as well.

Preseason Individual Honors Several Tigers received accolades in the preseason. Below is a list of all Tigers who received preseason recognition.