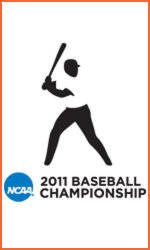 The winner of the Clemson Regional will play the winner of the Columbia (SC) Regional between June 10-13. The four teams in that regional are #1-seeded South Carolina, #2-seeded Stetson, #3-seeded N.C. State, and #4-seeded Georgia Southern.

Clemson’s NCAA Tournament History The 2011 season marks Clemson’s 36th trip to an NCAA Tournament dating back to the 1947 season. That year, Clemson actually advanced to the Final Eight of the NCAA Tournament, but it is not considered a College World Series season because only two teams went to the CWS in those days.

Clemson won the 1947 District III Tournament in Charlotte by coming through the losers’ bracket. The Tigers, coached by Randy Hinson, lost in the first round to Alabama 8-2, then came back with a win over Auburn and two wins over Alabama to advance. Clemson’s season ended when Yale, led by future President George H.W. Bush, defeated the Tigers in New Haven, CT by a score of 7-3. Bush was 1-for-3 as the starting first-baseman.

Clemson made its first trip to Omaha and the College World Series in 1958 when the Tigers again came through the losers’ bracket. After losing to Florida in the first round, Clemson came back to defeat George Washington, Florida State, and Florida twice to advance under first year Head Coach Bill Wilhelm. Clemson defeated Florida 15-14 and 3-1 on June 9 to advance. Harold Stowe struck out 17 in that second game on June 9, and that is still a Clemson single-game record for strikeouts in an NCAA Tournament game.

The Tigers advanced to Omaha in 1959, this time with three wins (one over Georgia Tech and two over Florida State). One of the wins over the Seminoles was a 24-2 victory at Gastonia, NC. That tally is still tied for the most runs scored by Clemson in an NCAA Tourney game.

The Tigers did not advance to Omaha again until 1976. In fact, Clemson made just one NCAA Tournament appearance between 1960 and 1974. That was in 1967 when Clemson reached the Regional Championship but lost to Auburn 6-5.

Clemson made it to Omaha three out of five years between 1976-80. Clemson won a regional in Columbia, SC in 1976 with three straight wins, then came through the losers’ bracket in Miami (FL) in 1977 to advance to Omaha. The 1980 season was the first year Clemson played host to a regional, as Clemson swept three games by scoring 45 runs, including 17 in a 17-12 win over South Carolina.

Clemson is 63-37 (.630) under Head Coach Jack Leggett in NCAA Tourney play, including a 38-7 record (.844) at home. Leggett has taken Clemson to a regional 17 times in the 18 years he has been Clemson’s head coach, and the Tigers have advanced to the College World Series six times. He has also taken Clemson to a super regional nine of the 12 years that format has been in existence.

Clemson to Host NCAA Regional for 13th Time Clemson will host an NCAA Regional for the 13th time in history in 2011. Included in that total is 11 times hosting in Jack Leggett’s 18 seasons as head coach at Clemson.

Scouting #1-Seeded Clemson First-seeded and #12-ranked Clemson (41-18) enters the NCAA Tournament coming off two wins in three games in the ACC Tournament at Durham, NC. Clemson was 17-13 during the ACC regular season, finishing second in the Atlantic Division standings. Clemson is making its 24th NCAA Tournament appearance in the last 25 years and 36th overall, tied for fifth-most in the nation.

Junior righty Justin Sarratt is 7-2 with a 2.40 ERA along with 60 strikeouts against 13 walks in a team-high 75.0 innings pitched over 17 appearances (12 starts). Sophomore righties Scott Weismann has a team-high seven saves since moving to the closer role. Clemson is fielding at a .970 clip as well.

Scouting #2-Seeded Connecticut Second-seeded and #16-ranked Connecticut (41-17-1) enters the Clemson Regional after going 2-2 in the Big East Conference Tournament last weekend. Connecticut, who is 20-6 on opponents’ home fields and 4-8 in neutral-site contests in 2011, had a 22-5 conference record during the regular season, as it finished atop the Big East Conference standings. The 2011 season marks the 17th time in school history that the Huskies have played in an NCAA Tournament.

Nick Ahmed is batting .327 with 21 steals. Ryan Fuller has totaled 24 doubles, four triples, five homers, 49 RBIs, and 11 steals, while Billy Ferriter has added 15 steals. John Andreoli, whose sister Kathryn is a student at Clemson, is hitting .309 with 20 stolen bases as well.

Clemson and Connecticut have never met on the diamond. However, Jack Leggett had a 5-4 record against the Huskies as head coach at Vermont from 1978-82.

Coastal Carolina is led by 16th-year Head Coach Gary Gilmore. The Chanticleers have won five games in a row and 16 of their last 19 games.

Junior righthander Anthony Meo is 9-3 with a 2.21 ERA and 108 strikeouts against 29 walks in 102.0 innings pitched over 15 starts. Senior lefty Matt Rein is 9-2 with a 1.78 ERA and .201 opponents’ batting average in 70.2 innings pitched over 17 appearances (nine starts). Sophomore righties Josh Conway and Ryan Connolly have three saves apiece to lead the squad.

The Tigers lead 29-5 over the Chanticleers in games played at Clemson, all of which have been played at Doug Kingsmore Stadium. Doug Kingsmore Stadium. The two teams have met twice in the NCAA Tournament. In the 2007 Myrtle Beach Regional, the Tigers won both games over Coastal Carolina by scores of 11-8 and 15-3 on their way to the regional title.

Scouting #4-Seeded Sacred Heart Fourth-seeded Sacred Heart (34-21) enters the Clemson Regional after winning the Northeast Conference Tournament with a 3-0 record. Sacred Heart, who is 18-13 on opponents’ home fields and 5-1 in neutral-site contests, had a 23-9 record during its conference regular season, as it finished second in the Northeast Conference standings. The 2011 season marks the second time overall that the Pioneers have played in an NCAA Tournament. The Pioneers were 0-2 in the 2006 Athens (GA) Regional.

Sacred Heart is led by 23rd-year Head Coach Nick Giaquinto, who played four years (1980-83) in the NFL with the Dolphins and Redskins. The Connecticut alum still holds the Husky single-game record with 277 rushing yards against Holy Cross in 1976.

Clemson and Sacred Heart have never met on the diamond.

Polls The Tigers moved up two spots to #12 in this week’s Sports Weekly coaches poll after going 2-1 in three games last week. Clemson also stayed at #14 in the Baseball America rankings and fell one spot to #19 in the Collegiate Baseball poll.

Clemson has had at least one final top-25 ranking in 14 of Head Coach Jack Leggett’s first 17 seasons in Tigertown. The Tigers have also been ranked #1 for 20 weeks by at least one of the three major polls under Leggett. Their last #1 ranking came on February 12, 2007 by both Baseball America and Collegiate Baseball.

24 That’s how many of Clemson’s 59 games have been against teams that will play in the 2011 NCAA Tournament, which equates to neary 41 percent. Clemson has an 11-13 record against the teams in the field. The Tigers have played eight different teams that are in the NCAA Tournament.

This is the third consecutive year Clemson accomplished the major sports triple. Clemson joins ACC-rival Florida State as the only two teams in the nation to do the feat each of the last three years. Clemson Athletic Director Terry Don Phillips and Florida State Athletic Director Randy Spetman have been at their respective schools for each of those seasons and are thus the only athletic directors nationally to have their programs accomplish the major sports triple each of the last three years.

Epps Earns All-ACC Tournament Honors Chris Epps earned All-ACC Tournament honors as one of three outfielders for his performance in three games at Durham (NC) Bulls Athletic Park from May 25-28. He was 3-for-9 (.333) with two home runs, one double, five RBIs, a 1.111 slugging percentage, three walks, one hit-by-pitch, a .538 on-base percentage, and one steal to lead the Tigers to two wins in three games.

Epps’ three-run homer in the fourth inning against #8 Georgia Tech on May 25 broke a scoreless tie in the Tigers’ 9-0 victory. Then against N.C. State on May 28, he hit another long homer in Clemson’s 6-3 victory.

Tigers Go 2-1 in ACC Tournament But Fall Short of Title Clemson, ranked as high as #14 in the nation, went 2-1 in the ACC Tournament at Durham (NC) Bulls Athletic Park from May 25-28. The Tigers outscored their opposition 18-9 and had a .298 batting average along with 10 doubles, four homers, three steals, and 11 walks against only nine strikeouts. Chris Epps, who earned All-ACC Tournament honors, went 3-for-9 with two homers, one double, five RBIs, and three walks. The Tiger pitching staff had a 3.00 ERA and .284 opponents’ batting average. Clemson’s defense committed just one error and turned six double plays as well.

In the Tigers’ first game of the ACC Tournament on May 25, Dominic Leone and David Haselden combined for a six-hit shutout in Clemson’s 9-0 win over #8 Georgia Tech. Leone allowed four hits with five strikeouts in 5.0 innings pitched to earn the win, then Haselden pitched 4.0 innings of two-hit ball to record the save. Epps’ three-run homer in the fourth inning broke a scoreless tie. The Tigers added five runs in the ninth inning, highlighted by two-out, two-run doubles by both Richie Shaffer and Schaus. Seven of Clemson’s eight RBIs came with two outs. Schaus went 4-for-5 with two doubles and two RBIs to lead Clemson, who totaled 13 hits in the game.

In the Tigers’ second game of the ACC Tournament on May 26, every Seminole starter had a hit in #7 Florida State’s 6-3 win over Clemson. The Seminoles put seven leadoff batters on base and James Ramsey went 2-for-3 with a homer and four RBIs to lead Florida State’s 13-hit attack. Sean Gilmartin tossed 6.0 effective innings to earn the win, while Daniel Bennett pitched a scoreless ninth inning to record the save. Will Lamb had two hits apiece to pace the Tigers, who totaled 10 hits in the game. Clemson stranded eight runners on base, including six in scoring position.

In the Tigers’ third game of the ACC Tournament on May 28, Clemson hit three home runs and defeated N.C. State 6-3. Brad Miller hit a solo homer in the fourth inning to cut N.C. State’s lead to 2-1. Then with the Wolfpack ahead 3-1 with two outs in the sixth inning, Shaffer crushed a three-run homer to give the Tigers the lead for good. Epps added a solo homer in the seventh inning. Scott Weismann pitched a perfect ninth inning with two strikeouts to record the save.