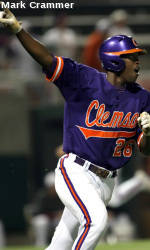 Clemson vs. Georgia Clemson (18-7), ranked as high as #17 in the nation, will travel to Athens to take on #1 Georgia (22-3) on Tuesday night at Foley Field. First pitch is scheduled for 7:00 PM. The game will be broadcast live on the radio by Clemson Tiger Sports Network. Live stats will also be available at ClemsonTigers.com.

The two teams will play again on Wednesday at Doug Kingsmore. First pitch for that game is scheduled for 7:06 PM. Wednesday’s game will be televised live by CSS as well.

The Series Clemson and Georgia have met 214 times on the diamond, with the Bulldogs holding a 116-96-2 advantage in the series that dates back to the 1900 season. Georgia is Clemson’s second-most played rival in school history, trailing only South Carolina (284).

The Starting Pitchers Georgia will start senior lefthander Jason Leaver (2-0, 5.93 ERA) on the mound. The Springfield, OH native has made four starts for a total of 13.2 innings pitched. He has allowed 12 hits (.231 opponents’ batting average) and six walks with 15 strikeouts.

Clemson has yet to determine its starting pitcher for Tuesday’s game.

The Bulldogs Georgia, led by eighth-year Head Coach David Perno and ranked as high as #1 in the nation, enters Tuesday’s game against #17 Clemson with a 22-3 overall record and 7-2 SEC mark after sweeping Tennessee in a three-game series on the road over the weekend. The Bulldogs, who are 14-1 at home, started the year 14-0 and have won eight of their last nine games.

Junior first-baseman Rich Poythress, a candidate for national player-of-the-year, is hitting .447 with seven doubles, 13 homers, 47 RBIs, a .936 slugging percentage, 22 walks against only nine strikeouts, a .556 on-base percentage, and three steals. Johnathan Taylor is batting .394 with a team-high 15 stolen bases, while Joey Lewis is hitting .365 with 12 doubles, eight homers, and 27 RBIs.

The Tigers Clemson, ranked as high as #17 in the nation, enters Tuesday’s game at #1 Georgia with an 18-7 overall record and 7-5 ACC mark after winning two of three games at Boston College over the weekend. Clemson is 4-5 on opponents’ home field this season.

The Tigers are averaging 6.4 runs per game and are hitting .284 with a .426 slugging percentage and .379 on-base percentage. Clemson has also totaled 40 doubles, six triples, 23 homers, and 37 stolen bases in 48 attempts.

Ben Paulsen is hitting a team-best .396 with seven doubles, two triples, five homers, and a team-high 25 RBIs. Mike Freeman is batting .337 with a .459 on-base percentage along with seven stolen bases. Freeman is also 29-for-67 (.433) in the last 16 games. Kyle Parker, who missed the entire Boston College series in order to attend spring football practice, has added three homers and 18 RBIs in 22 games.

Polls The Tigers moved up three spots to #17 in the Sports Weekly coaches poll this week after going 4-1 in five games last week. Clemson also remained at #22 in the Collegiate Baseball poll and unranked in the Baseball America poll.

Miller Going Gloveless at the Plate Freshman shortstop Brad Miller (Windermere, FL) never used batting gloves at the plate during his prep career at Olympia High School, where he earned numerous accolades. When Miller, who is one of only three Tigers to start every game this season, started his first season at Clemson, he decided to wear batting gloves on a regular basis, a period that lasted the first 20 games of the 2009 season. In those 20 games, he hit just .222 (16-for-72).

So Miller decided to make a change back to his old ways of not wearing batting gloves starting with the doubleheader against Elon on March 24. That move has helped to pay dividends, as he is hitting .435 (10-for-23) in the last five games since making the switch. Overall, he is hitting .274 on the season with two homers and 16 RBIs. He has also walked 20 times against 12 strikeouts and has six steals.

Tigers Nip Boston College Twice on the Road Clemson, ranked #20 in the nation, won two of three games against Boston College at Eddie Pellagrini Diamond on March 27,28. The Tigers hit .284 with four doubles, two triples, and four homers. Ben Paulsen went 6-for-10 with four runs, two triples, one homer, five RBIs, and three walks. Brad Miller added five hits and four RBIs. The Tiger pitching staff had a 7.62 ERA, but they had saves in both of their wins. Clemson committed just one error, while the Eagles were errorless in the series.

In game-one on March 27, Mike Belfiore hit two homers with seven RBIs to lead Boston College to a 13-1 win over Clemson. Belfiore hit a grand slam in the first inning and three-run homer in the second inning, as the Eagles scored four runs apiece in the first, second, and sixth innings. Tony Sanchez added a three-run homer in the sixth inning. Eleven of Boston College’s 13 runs came on its four home runs. J.B. MacDonald pitched 8.0 strong innings of five-hit ball to earn the win. Clemson totaled seven hits by seven different players and left 10 runners on base against only two by the Eagles.

In game-two on March 28, which was the first game of a doubleheader, Clemson hit four home runs and held on for a 7-6 win over Boston College. All seven Tiger runs came on long balls, the first three of which were all two-out, two-run homers. Paulsen, Miller, Tomas Cruz pitched the final 2.0 innings to record the save. Belfiore hit two of the Eagles’ three home runs as well.

In game-three on March 28, which was the second game of a doubleheader, Paulsen went 4-for-4 with three RBIs to lead Clemson to a 5-3 victory over Boston College. Paulsen also hit a triple, scored a run, and had a walk, while his two-run single in the ninth inning proved to be the difference in the game. Will Lamb added two hits and two runs, while Miller had two hits and two RBIs for Clemson, who had 13 hits. Starter Graham Stoneburner pitched 8.1 effective innings, allowing three runs on nine hits to earn the win. Matt Vaughn retired the only two batters he faced with the potential tying run on first base to record the save.