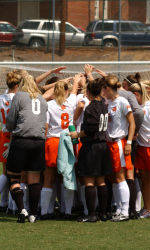 CLEMSON, SC – Three players have signed National Letters-of-Intent to play women’s soccer for Clemson in the fall of 2007.

The signees include Paula Pritzen, Samantha Fortier, and Stefanie Schroeder.

“We are excited to add these three student athletes to our program,” said Head Coach Todd Bramble. “In addition to the three players that started here in January, we have assembled a very balanced recruiting class and have filled our needs created by graduation.

“All of these players bring accomplished youth careers into our program. The training they have received from some of the best youth clubs in the country will prove invaluable.”

“Paula is a gifted goalkeeper with a nice balance of technical and athletic ability. The training she has received coupled with the training she will receive here and her strong work ethic paints a very bright picture for her future at Clemson,” said Bramble.

“You always want players from the top clubs because of the training you know they are getting. The experience Pritzen has as a result of her time with the Challenge Soccer Club gives her an edge when it comes to making the transition to the college game,” said Clemson Assistant Coach Tom Stone.

“Samantha is most comfortable as an attacking player on the left side. She is a crafty, dynamic 1 v 1 dribbler who is capable of providing good service into the penalty area,” said Bramble.

“Every team needs dribblers that can unbalance an opponents defense. Sam’s pace and take-on mentality will serve us well in the ACC,” said Stone.

Schroeder is a defender from Carrollton, TX and plays for FC Dallas Soccer Club. Her club team was a State Cup Semi-finalist in 2004 and went to Region III Regionals. FC Dallas is the youth club aligned with the FC Dallas MLS Pro team. Played at Hebron high school and was named all-district.

“Stefanie will bring a presence to our defensive unit. She is good in the air, very difficult to get behind and is comfortable with the ball at her feet,” said Bramble.

“Schroeder is our first committment from FC Dallas, a club known for its player development and one we’ve hoped to tap into for some time now. Her club coach, Chris Ring, has done a great job with Stefanie…she has a real shot to contribute right away,” said Stone.

Clemson finished the 2006 season with an 11-8-5 record overall and a 5-3-2 mark in the ACC. The Lady Tigers advanced to the NCAA Final Eight.