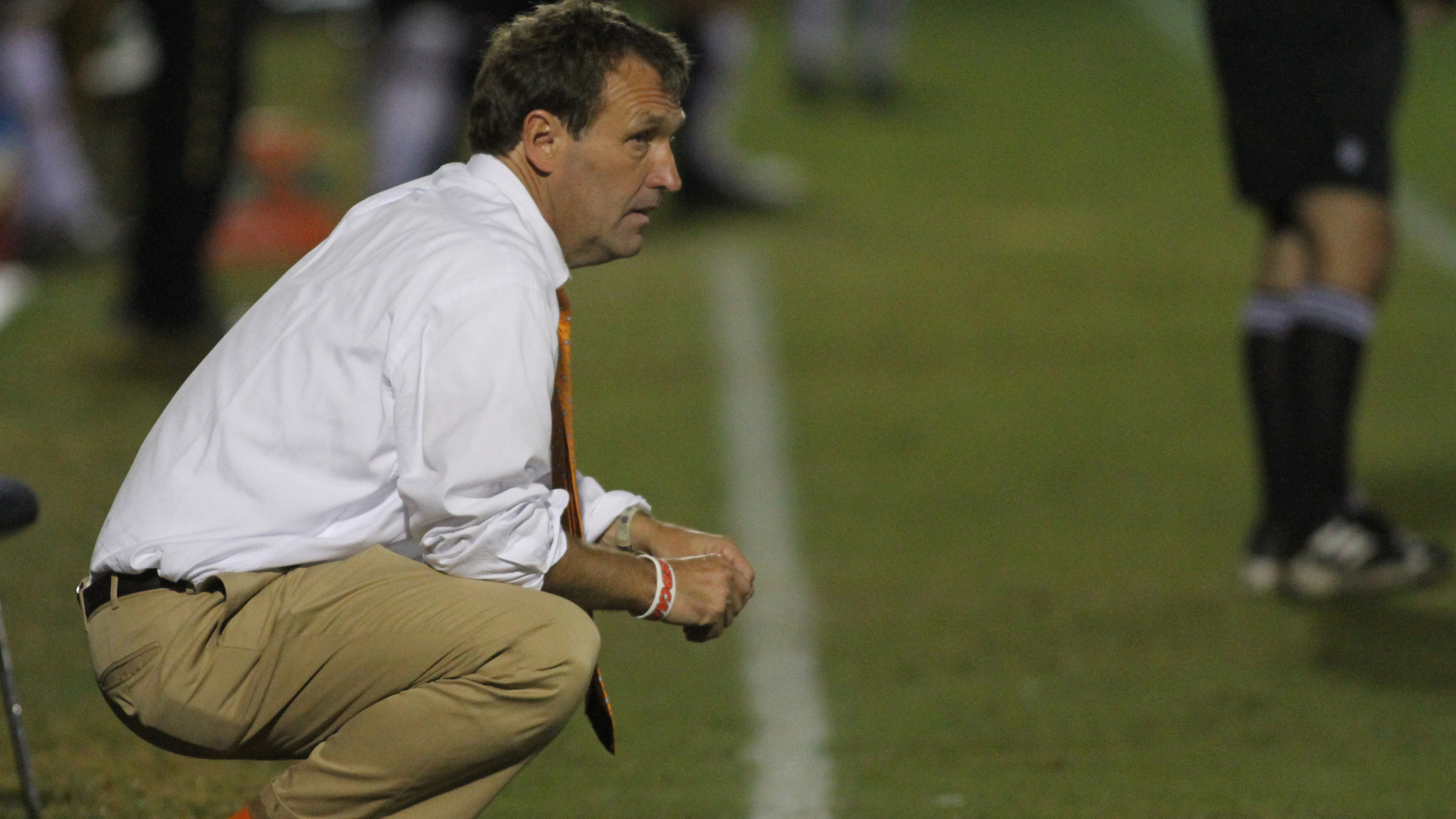 CLEMSON, SC – Clemson Head Men’s Soccer Coach Mike Noonan has announced the signing of six student-athletes to National Letters-of-Intents to play for the Tigers this fall. In addition, this recruiting class consists of one transfer.

Diego Campos, Saul Chinchilla and Gerald Vargas all join the Tigers for the upcoming season from Montverde Academy who is coached by former Clemson Soccer player and assistant coach, Mike Potempa.  Campos, Chinchilla and Vargas travelled to England in March 2012 with their team to play against Liverpool FC, Everton FC, Portsmouth FC and Bury FC.

Diego Campos, a Costa Rican forward, helped lead the Montverde Academy Eagles to back to back National Championships as well as the unanimous #1 National Ranking in both his junior and senior seasons.  Campos led his high school team in scoring during his junior year with 25 goals and 37 goals in his senior campaign.  In the 2013 Montverde Academy Soccer Tournament (M.A.S.T), Diego was awarded the Golden Boot Award.  During the 2014 M.A.S.T, Diego was awarded the Most Valuable Player award during the tournament. Campos is currently ranked 48th by College Soccer News in the Class of 2014.

“Diego has been a proven goal scorer at every level throughout his career,” said Clemson Head Coach Mike Noonan.  “Our hopes are that he will bring this ability to the Tigers and solidify a targeted area for improvement from last season.”

Saul Chinchilla, a midfielder from Costa Rica, is another Montverde product.  In Saul’s junior season, he was Montverde’s second leading scorer with 15 and continued with 12 goals in his senior year.  Saul was an integral part of Montverde Academy’s National Championship seasons in both his junior and senior year. College Soccer News ranks Saul #39th in the Class of 2014.

“Saul is one of the most versatile players we have recruited to Clemson,” said Noonan.  “He can play an array of positions from defense to forward.  His tactical knowledge is excellent which allows us a great deal of flexibility with our personnel and team shape.”

Gerald Vargas, originally from Costa Rica, is a midfielder who played a major role in Montverde’s back-to-back National Championships in the 2012-13 and 2013-14 seasons.  Gerald was named the 2013 M.A.S.T. Most Valuable Player and was named to the 2014 M.A.S.T. All-Tournament team.  As a junior, Gerald scored nine goals and added 12 goals in his senior campaign, providing a number of assists in both seasons. Vargas is ranked #49th by College Soccer News in the Class of 2014.

“Although short in stature, Gerald packs a big punch,” said Noonan.  “His greatest asset is that he keeps possession of the ball and links the defense to attack superbly.  He is also capable of scoring from distance which we will utilize to our advantage as well.”

Michael Melvin, a starter for Nease High school in Ponte Vedra, FL., scored seven goals as a freshman and 15 goals as a sophomore from the left back position. In his sophomore year, Melvin scored the game-winning goal to clinch the District 4A Championship and received the Captains Choice Award for his leadership and contribution.

From 2010 to 2012, Melvin played for Jacksonville United FC in the Region III Premier League, coached by Ian Hardington. His team was Florida State Cup Champions in 2012 while being ranked #1 in Florida and ranked #2 in Region III. Michael is currently the starting left back for Orlando City Development Academy, coached by Paul Shaw and Sean Murphy, and is ranked 64th by the College Soccer News in the 2014 recruiting class.

“Michael is a Tiger through and through,” said Noonan.  “He has attended our camps for the past four years and played exceptionally well for his club team, Orlando City, under the guidance of former Tiger assistant coach Sean Murphy.  Michael is an attacking wide left player with a ton of energy and passion to improve. Natural left-sided players with Michael’s ability are hard to find and we feel he can develop into one of the best to put on a Tiger jersey.

Grayson Raynor hails from Greenville, SC. and attends Riverside High School where he plays for head coach Kevin Brabham. A team captain, Raynor was named on the All-Region team and is an honor roll student at Riverside.

Raynor plays his club soccer for CESA 95 Premier, under the guidance of Nick Finotti and Clemson Soccer alumnus Pearse Tormey, and has led his team to a total of six State Championships. In 2012, his team was crowned USYSA Region III Champions and placed 2nd at US Youth Soccer National Championships.

“Grayson is a tireless worker with flare and an edge to his game that attracted lots of attention throughout the state,” said Noonan.  “He has the versatility to play up front or wide in the midfield and should add competitive depth to these areas in our team.  He is a ‘diamond in the rough’ who should progress well throughout his career at Clemson.”

Tyler Rider, another Greenville, SC. native, attends J.L. Mann High School and plays soccer for Brian Dender. A four-year starter, Rider led his team to a 4A State Championship in 2012 and Upper State semi finalists in 2011. He was an All-Region selection in 2012 and 2013 as well as being named captain in 2014. Tyler is also a four-year honor roll student and member of the National Honor Society.

Rider also plays for 2012 National Runner-up CESA 95 Premier with teammate and Clemson commit Grayson Raynor.  As captain, Tyler has been an integral part of the team’s success on a state, regional and national level within the U.S. Youth Soccer competition by most recently garnering the 2013 Premier League East Championship. Rider is ranked 124th by College Soccer News in the 2014 class.

“Tyler is a clean and skillful player who will feature in mostly central roles,” said Noonan.  “He is another player who will add versatility to our team and has a passion to challenge himself in the ACC.  Tyler has a competitive streak to compliment his skill level that attracted our staff during his recruitment.

“Local talent has been vital to our success so far and Tyler & Grayson represent in this class what Ara Amirkhanian, Kyle Fisher, Bobby Belair, Chris Glodack, John Cajka and the Burnikel’s have proven to be true…the best South Carolinians can and will succeed in the ACC at Clemson.”

Iman Mafi, born in Norway, is a transfer student from Gardner-Webb University. In 2013, Iman played in all 18 matches for the Runnin’ Bulldogs, scoring three goals and adding one assist.  His performances throughout the year earned him a place on the Big South All-Freshman Team. Prior to Gardner-Webb, he attended Dahlske Viderregäende Skole in Norway and played for the FK Jerv under head coach Peer Danefeld.

“Iman is a terrific talent whose range and weight of pass can unlock opponents’ defenses,” said Noonan.  “Iman had a desire to be in a larger environment and to challenge himself in the best soccer conference (ACC) in the country.  After competing against him last year, we feel strongly that he will contribute effectively for our team next fall.”