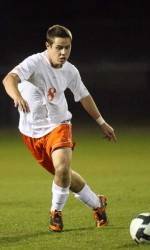 Clemson and Virginia Tech Play to a 1-1 Overtime Draw

Virginia Tech took a 1-0 lead at the 18:05 mark as Clarke Bentley converted on a penalty kick for his first goal of the season.

Clemson tied the score late in the first half in the 43rd minute as Sumpter took advantage of a one-on-one situation and slipped the ball passed the Virginia Tech goalkeeper, Kyle Renfro for his second goal of the season.

With 11:44 left to go in regulation Sumpter took a shot that went wide left of the goal.

The Tigers’ Wes Nelson received a red card with 6:45 left to go in regulation making Clemson play with a man short the rest of the match and the two overtime periods for a total of 26:45.

In the first overtime period, Cody Mizell saved a shot by Jed Prater of Virginia Tech at the 97:35 point in the match. He saved another shot by Albert Alwang in the second overtime period in the 105th minute.

The Tigers took only one shot in overtime and it was by Tommy Drake with 4:11 left to go in the second overtime period.

Virginia Tech had 17 shots compared to Clemson’s seven. The Hokies had 10 corner kicks and Clemson had six.

The Tigers will play at Furman on Wednesday, September 22 at 7:00 p.m. in Clemson’s next action.