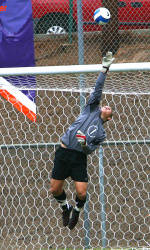 Clemson and Southern Wesleyan to Meet in Scrimmage Tuesday

CLEMSON, SC – The Clemson men’s soccer team will play host to Southern Wesleyan in an exhibition match on Tuesday night at 6:00 p.m. at Historic Riggs Field.

Clemson’s goalkeeper Joseph Bendik finished the 2008 season with 92 saves and a 1.42 goals allowed average. He led the ACC with over five saves per game. He has 196 career saves, seventh on the Clemson career list. He finished 26th in the nation in saves per game in 2008.

Maryland defeated North Carolina 1-0 in the finals of the 2009 NCAA Men’s Soccer Cup in Frisco, TX in December. The Tigers were one of only two teams to defeat both Maryland and UNC last season.