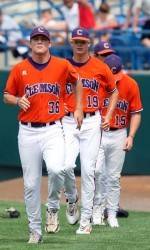 Clemson and Oklahoma to Resume Play at 4:30 PM ET Wednesday

Tuesday night’s 2010 CWS game between Clemson vs. Oklahoma game has been suspended due to weather. Clemson leads Oklahoma 6-1 going into the top of the sixth inning. The game will resume Wednesday, June 23 at 3:30 p.m. (CT) on ESPNU. The TCU-Florida St. game will begin 50 minutes after the completion of the Clemson-Oklahoma game on ESPN2.

Clemson will be the designated home team and occupy the third-base dugout on Tuesday. The loser of that game will play the winner of the Arizona State vs. South Carolina elimination game on Thursday at 7:00 PM EDT on ESPN2, while the winner will move to the championship round of the bracket to play on Friday at 9:00 PM EDT on ESPN2.

Tuesday’s game will be broadcast live on the radio by Clemson Tiger Sports Network. Live stats will also be available at ClemsonTigers.com.

Clemson vs. Oklahoma Series History Clemson and Oklahoma have met just one time in history. On May 23, 1992, Oklahoma defeated the Tigers 7-6 in the NCAA Mideast Regional at Starkville, MS to end their season. The 1992 season was Jack Leggett’s first of two years as an assistant coach at Clemson.

Wilson Boyd, Mike Freeman, and Brad Miller have all his safely in all eight NCAA Tournament games. Meanwhile, John Hinson is 16-for-33 (.485) with five homers, one double, 11 RBIs, 11 runs, and three walks in the NCAA Tournament. He has also has seven multi-hit games in the 2010 NCAA Tournament.

Clemson’s CWS Streak Continues With Clemson’s appearance in the 2010 College World Series, the Tigers’ streak of going no more than three years in a row without a CWS appearance continued. That means that every Tiger since the freshman class of 1988 who has been in the program and been on the postseason roster for four straight years has made at least one trip to Omaha. The last time the Tigers went four straight years without a trip to Omaha was 1987-90.

Only three other schools have current streaks as long as the Tigers. Miami (FL) has not gone four years in a row without making it to Omaha since 1970-73, while Cal State Fullerton (1971-74) and Louisiana State (1982-85) also have streaks longer than the Tigers’ streak.

Tigers Top #1 Sun Devils 6-3 Monday In the Tigers’ first game of the College World Series on June 21, Casey Harman and Alex Frederick combined to limit #1 Arizona State to three runs and eight hits in Clemson’s 6-3 win. Harman pitched 6.0 strong innings to earn the win, while Frederick pitched 3.0 innings to record the save, as he yielded just one hit, no runs, and one walk with two strikeouts. Clemson outhit the Sun Devils 14-8 and every Tiger starter had at least one hit. The Tigers won their fourth College World Series opener in a row, while it was their 11th all-time win over a top-ranked team and their first since 2006.