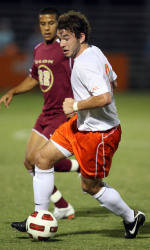 Midway in the first half in the 26th minute, Clemson threatened as Austin Savage sent a header towards the goal from six yards out from the middle, but Georgia Southern’s goalkeeper Ryan Platt was there to make the save.

Georgia Southern took a 1-0 lead in the 28th minute. The Eagles’ David Leonard drove down the middle of the field and sent the ball to the right to Jon Cox. Cox drove the field and sent a diagonal shot at a severe angle to the left wall of the net for his fourth goal of the season.

Right before the half in the 29th minute, Clemson’s Savage again threatened, this time with an 12-yard diagonal shot that was saved by Platt.

Clemson tied the game late in regulation with only 3:42 left. Riley Sumpter at the top of the box. Sumpter controlled the ball and sent a pass to Stephen McGill. McGill fired a shot from eight yards out into the net for his first goal of the year.

The Tigers took five shots in the overtime periods compared to one for Georgia Southern. Savage took an eight-yard shot with 2:25 left to go in the first overtime period that went wide right. With two seconds remaining, Stephen McGill took a 24-yard curving shot that was heading toward the upper right corner of the goal, but Platt made the save to send the game to the second overtime period.

With 3:55 left to go in the second overtime, Nick Burton was on a break away and Platt the Eagles’ goalkeeper came charging out and made a save on Burton’s shot in eight yards in front of the right post.

Georgia Southern threatened with 3:22 left in the second overtime period as Cox took a 22-yard attempt that was saved by Mizell.

Clemson had one more chance. With :22 seconds remaining the Tigers’ Francklin Blaise took a header from eight yards out but it was saved by Platt to preserve the draw.

“We were lethargic and reactive throughout the game,” said Clemson Head Coach Mike Noonan. “We had plenty of opportunity to score. We were not focused enough to take advantage of our opportunities. We did not play with enough urgency. It just didn’t fall for us tonight–this was not our best game. Overall, I feel as though we made good progress this season. Our record does not reflect this progress. I’m very proud of this young team. The future is bright for the Clemson program.”

Clemson will play host to ACC-foe Duke on Friday night at 7:00 p.m. in the Tigers next action.