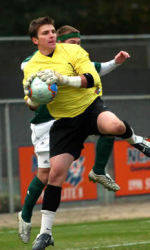 The Tigers are seeded ninth in the tournament and received a first-round bye.

Phil Marfuggi has a 1.18 goals allowed average and has 61 saves this season.

Clemson is participating in the NCAA Tournament for the 26th time in school history. Clemson has been to the NCAA Final eight 12 times and also to seven NCAA Final Fours including last year’s appearance.

In the final Soccer America poll of the season, the Tigers finished ninth. In the National Soccer Coaches Association of America (NSCAA) poll, the Tigers are ranked ninth. Clemson is ranked 11th by Soccer Times, and ninth by College Soccer News.