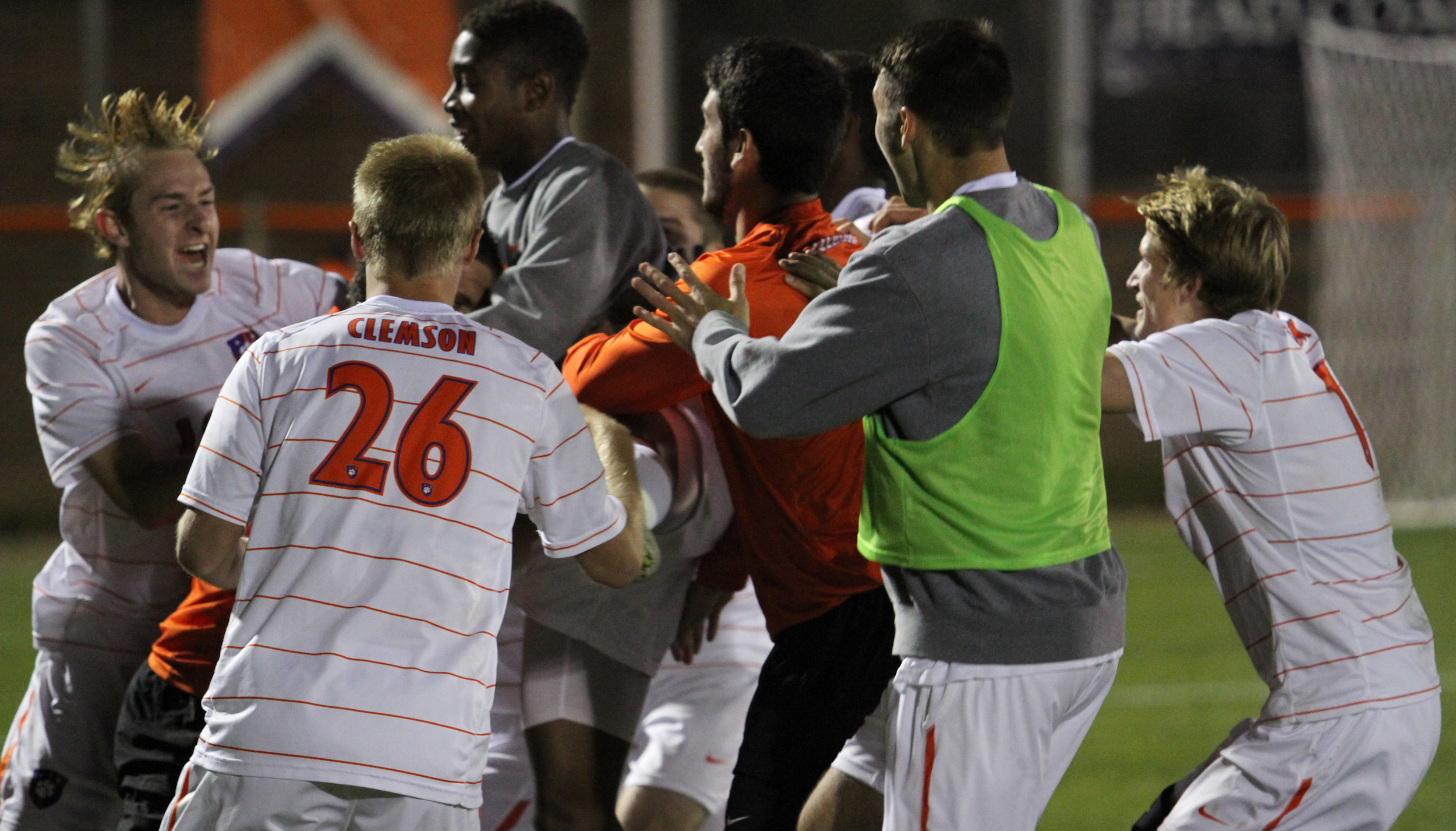 CLEMSON, SC – Clemson and #24 Boston College played to a 0-0 tie in the quarterfinal round, but the Tigers advanced to the semifinal round of the ACC Men’s Soccer Tournament by winning the penalty kick round 3-1 at Historic Riggs Field in Clemson, SC Tuesday night.The game officially ends in a 0-0 draw.  Clemson is now 6-8-5 on the year, while Boston College is now 8-5-5.  This was the first penalty kick round won by Clemson since 2002 when the Tigers won over Coastal Carolina 1-0 in sudden death penalty kicks in a NCAA Tournament match on November 27, 2002.  Over the years, Clemson is 3-6 in penalty kick rounds.Clemson will play #1-seeded Maryland in the ACC Tournament’s semifinal round on Friday at 5:30 p.m. at Germantown, MD.  This is the first semifinal match in the ACC Tournament for the Tigers since 2005.”I am very relieved,” said Clemson Head Coach Mike Noonan.  “We give credit to Boston College as they have had a great year.”The two teams have played to 0-0 ties twice this season.  In the regular season, the two teams had a 0-0 tie on October 13, at Boston College.The two teams were almost even in shots as Boston College had 12 shots and Clemson had 14.  In the overtime rounds, Clemson had five shots and the Eagles had four.”We really value the history of Historic Riggs Field and I hope this is one of many exciting moments to come for our program in the future,” said Noonan.Clemson’s goalkeeper Cody Mizell made three saves on the night.  In the penalty kick round, the Tigers substituted freshman Chris Glodack for Mizell and Glodack responded, saving two of the Eagles’ attempts in the penalty kick round.”We were a little concerned about an injury that Cody Mizell was carrying,” said Clemson’s Head Coach Mike Noonan.  “Glodack was ready and responded well – I am very happy for him.”In the penalty kick round, Boston College’s Kevin Mejia made the first  kick.  Clemson’s Ara Amirkhanian was successful on his.  Colin Murphy of Boston College missed his attempt as it was saved by Glodack.  Clemson’s T.J. Casner responded and made his attempt.The Eagles’ Ryan Dunn missed his shot wide left.  Clemson’s Manolo Sanchez‘ kick was saved by Luthy.  The Eagles’ Isaac Taylor’s shot was saved by Glodack.  Clemson’s Amadou Dia gave the Tigers the victory in the penalty kick round by converting his kick into the netting giving the Tigers the 3-1 victory in the penalty kick round.”This game was frustrating in the way we played,” said Noonan.  I thought we played well the first 15 minutes of the game and then we took our foot off the gas.  We move on to the semifinal round – we need to focus and play better in the next round.  This team, like I said earlier, responds well to the tough challenges.””I’m glad I can help the team win,” said Glodack.  “The coaches gave me a heads up that I might play in the penalty kick round.  When I stepped over the line I was focused and was ready to do my job.  My teammates helped me tonight.  They talked to me before I went out there, and I stayed positive and I helped the team advanced.  I’m just glad I could help,” added Glodack.Clemson 0, Boston College 0Shots:  Clemson 14, Boston College 12Corner Kicks:  Clemson 5, Boston College 3Saves:  Cody Mizell (CU) 3, Justin Luthy (BC) 3Fouls:  Clemson 11, Boston College 12Attendance:  2,108Penalty Kick Round SummaryBoston College Goalkeeper: Justin Luthy; Clemson Goalkeeper: Chris GlodackBC – Kevin Mejia, goal madeCU – Ara Amirkhanian, goal madeCU 1, BC 1BC – Colin Murphy shot savedCU – TJ Casner goal madeCU 2, BC 1BC – Ryan Dunn, shot wide leftCU – Manolo Sanchez shot savedCU 2, BC 1BC – Isaac Taylor, shot savedCU – Amadou Dia, goal madeCU 3, BC 1