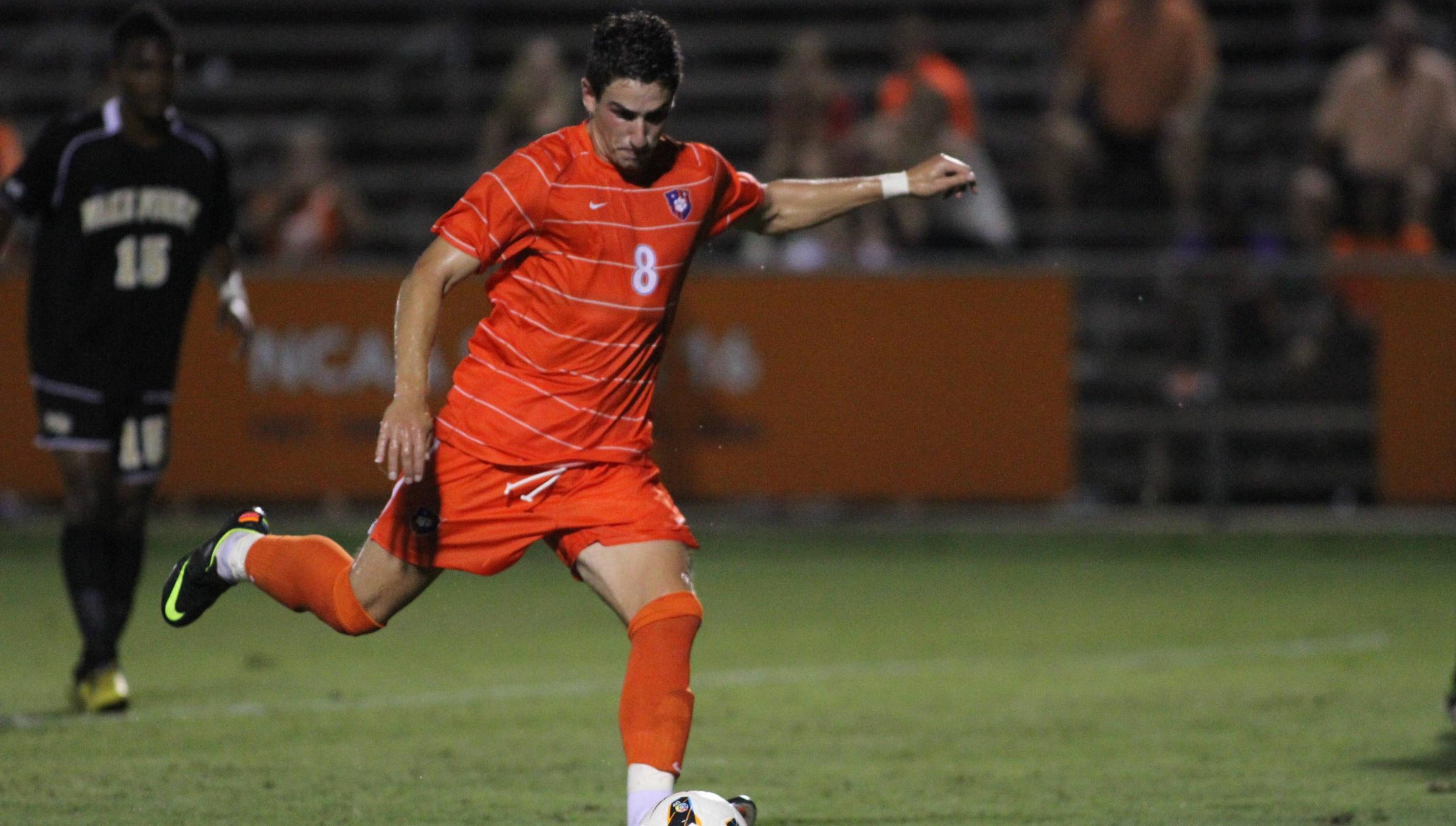 CLEMSON, SC – Clemson and #14 Wake Forest played to a 1-1 overtime tie in an Atlantic Coast Conference men’s soccer match at Clemson, SC Friday night.  With the draw, Clemson is now 1-2-2 overall, while Wake Forest is now 3-0-1 this season.  The Demon Deacons are ranked 14th nationally. There were many near misses in the first half.  In the 11th minute, Wake Forest’s Collin Martin took a corner kick from the right side.  Danny Wenzel took a diving head shot from the six-yard box that went toward the right center of the goal.  Clemson goalkeeper Cody Mizell tipped the ball over the goal to make the save.  Mizell finished with seven saves on the night.In the 24th minute, Clemson’s Paul Clowes served the ball from the right to Ara Amirkhanian.  Amirkhanian attempted a header that went over the top center of the goal.  In the 37th minute, Wake Forest threatened as Kyle Emerson fired a 22-yard shot that went wide of the right post.The second half is when both teams netted goals.  In the 64th minute of play, the Deacon’s Luciano Delbono drove down the left center of the field and took a 25-yard shot that went wide of the left post.Clemson scored in the 66th minute on a penalty kick.  Wake Forest Sean Okoli committed a hand-ball violation in the upper corner of the penalty box on the left.Clemson’s Manolo Sanches converted on the penalty kick in the center of the goal as the Wake Forest goalkeeper Michael Lisch dove to his left.   Three minutes later, Wake Forest scored at the 68:58 mark in the game.   Delbono crossed the ball to Okoli from the left.  Okoli tapped the ball in from close range just inside the left post for his first goal of the season.In the first overtime, in the 94th minute of play, Okoli of Wake Forest tried a shot from the left from 18 yards out, but his attempt hit the left wall of the net.    With 5:55 left to go in the second overtime period Amarkanian of Clemson attempted a shot that was blocked by a Deacon defender, and his second attempt was saved by Lisch.  “I was proud of the team,” said Clemson Head Coach Mike Noonan.  “We had a great crowd, and they energized our team.  I appreciate the efforts of the Athletic Department for having promoted this game and what they did to attract this large crowd.

“We got off to a great start and did a good job until we conceded and gave up a soft goal,” said Noonan.  “I was disappointed in the let down.  We have got to learn to play all 90 minutes of a match.  We defended well.  The communication and the organization are much improved.  We have got to learn to play intense for 90 minutes, and we can’t relax and congratulate ourselves.”Clemson will play host to Alabama-Birmingham at Historic Riggs Field on Monday night at 7:00 p.m. in the Tigers’ next action.Clemson 1, #14 Wake Forest 1 (OT) Clemson – Manolo Sanchez (Penalty Kick) 65:58Wake Forest – Sean Okoli (Luciano Delbono) 68:58Shots:  Clemson 9, Wake Forest 17Corner Kicks:  Clemson 3, Wake Forest 5Saves:  Cody Mizell (CU) 7, Michael Lisch (WF) 3Fouls:  Clemson 8, Wake Forest 7Attendance:  6,188