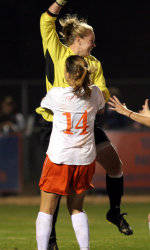 Clemson advances to NCAA Second Round

CLEMSON, SC–Clemson advanced to the second round of the NCAA Women’s Soccer Tournament with a 4-3 win over Vanderbilt in the penalty kick round. At the end of two overtime periods, the score was tied 1-1.

Clemson scored early in the first half. Britten Meyer passed the ball to Julie Bolt. Bolt sent a nine-yard shot into the net for her fifth goal of the season at the 5:07 mark.

Vanderbilt tied the score when Amy Baumann scored her eighth goal of the season in the 22nd minute. She was assisted on the play by Sarah Dennis and Meredith Kohn.

“First of all, I want to congratulate Vanderbilt on a great season,” said Clemson Head Coach Todd Bramble. “We showed the character that this team has developed over the course of the season. I’m very proud of our players, they never game up. I thought that Nuria Zufia, Elizabeth Jobe had great games, and I also thought Lily Boleyn came off the bench and did a good job for us.”

Clemson will play host to Oklahoma State on Sunday afternoon at Historic Riggs Field at 2:00 p.m. in the second round. Okahoma State is ranked ninth and defeated UNC Greensboro 2-0 earlier today at Clemson.