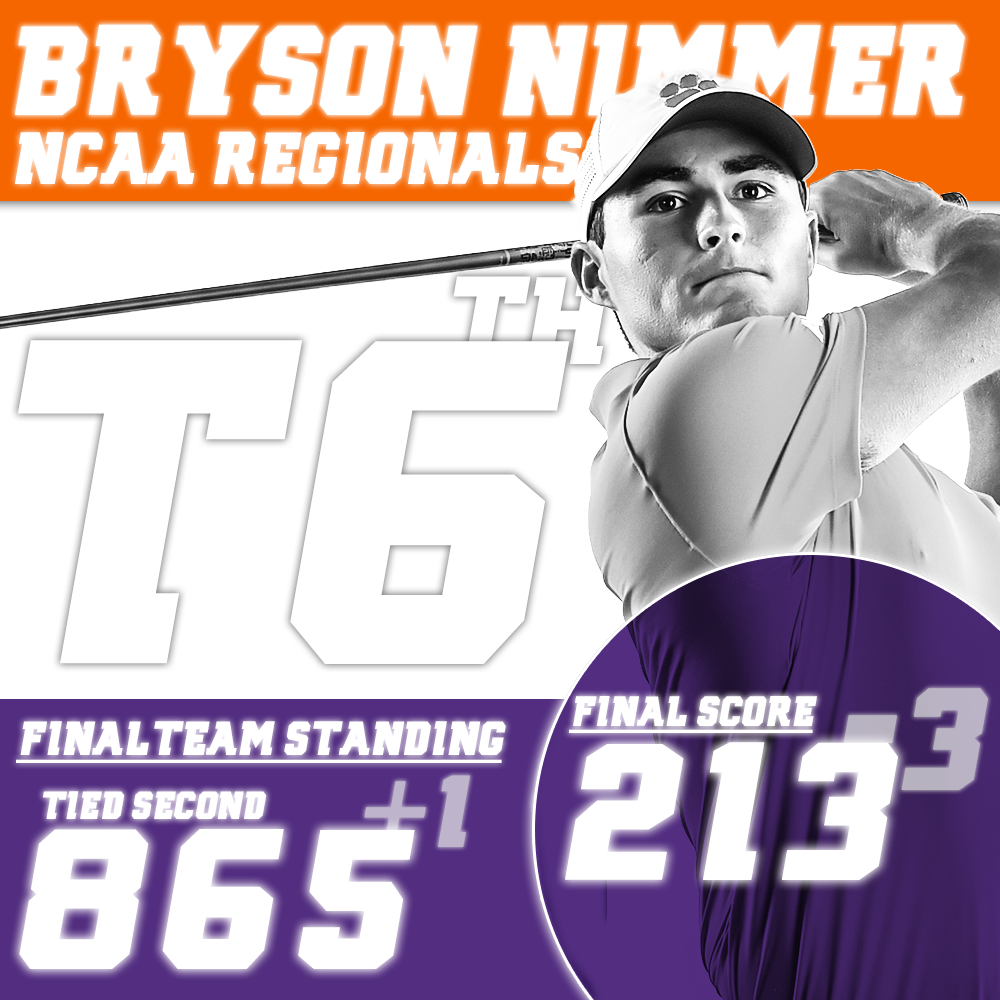 College Grove, Tenn.—William Nottingham and Carson Young both shot even par scores of 72 on Wednesday to lead Clemson to a tie for second-place finish at the NCAA Men’s Golf Regional at the Grove Golf Club in College Grove, Tenn.   The Tigers now advance to the NCAA Championship Tournament at Rich Harvest Farms Golf Club in Sugar Grove, Illinois, May 26-31.

While it was certainly a goal to win the tournament, Head Coach Larry Penley was pleased with his team’s performance.  The top five teams in the regional advance to the national.

“It would have been nice to win the tournament, but the goal is to finish in the top five and we did that fairly easily (by 12 shots). We now have a chance to play for a national championship.

“This is always a pressure day because you just don’t know what is going to happen at a regional. You look at teams around the country who were in the top 25 going into the regional who did not advance. We have been in that position before and not made it so you learn to appreciate it when you do.

“I was pleased with how the freshmen played today and I was happy for (senior) Austin (Langdale). He was in the game all day and he is getting better (in terms of health). The rust is coming off and we are going to need him at the national tournament.” Langdale has missed almost half the season with shoulder and wrist injuries.

“A big key for us today was that we got off to a good start and we hung in there when the wind kicked up in the middle of the round.   And we didn’t have many big numbers. “ In fact Clemson counted just one double bogey all day.

Sophomore Bryson Nimmer had a 76 on Wednesday, but finished in a tie for sixth place with a 213 score for the three days. His opening round 66 was the best of the week by a Clemson golfer and tied the school record for score vs. par in an NCAA regional.

Nottingham and Doc Redman finished at even par 216 for the three rounds and finished tied for ninth. Nottingham was Clemson’s top golfer in the second round with a two under par 70, then shot an even par 72 in the final round. Combined with is 10th place finish at the ACC Tournament, Nottingham is the first Clemson freshman to record at top 10 at the ACC and NCAA Regional since Kyle Stanley finished third at each in 2007.

Redman had a 73 in the final round, including a birdie on the final hole to also finish in the top 10.   It was his team best eighth top 10 of the year, a Clemson freshman record and tied for the third most by any Tiger in history.

Young had a 72 on Tuesday and Wednesday and finished 18th with a 220 score.   Langdale finished with a 235 score, but his final round 76 was a counting score for the team. He had four birdies in the final round, tied for the most among Tigers.

It was an interesting final round for the teams at the top of the leaderboard. None of the top five teams were in danger of falling below the cutline, but they did have a great competition for the championship. At one point on the second nine there was a four-way tie for first place.    But UCF dominated the down wins par five final hole, counting three birdies and an eagle and won by two shots.

The second place finish was the eighth consecutive first or second place for the Clemson program this spring. It is the first time in history Clemson has done that in every tournament in the spring.   Clemson’s national championship team had a third place in Las Vegas during its 2003 run to the national title.