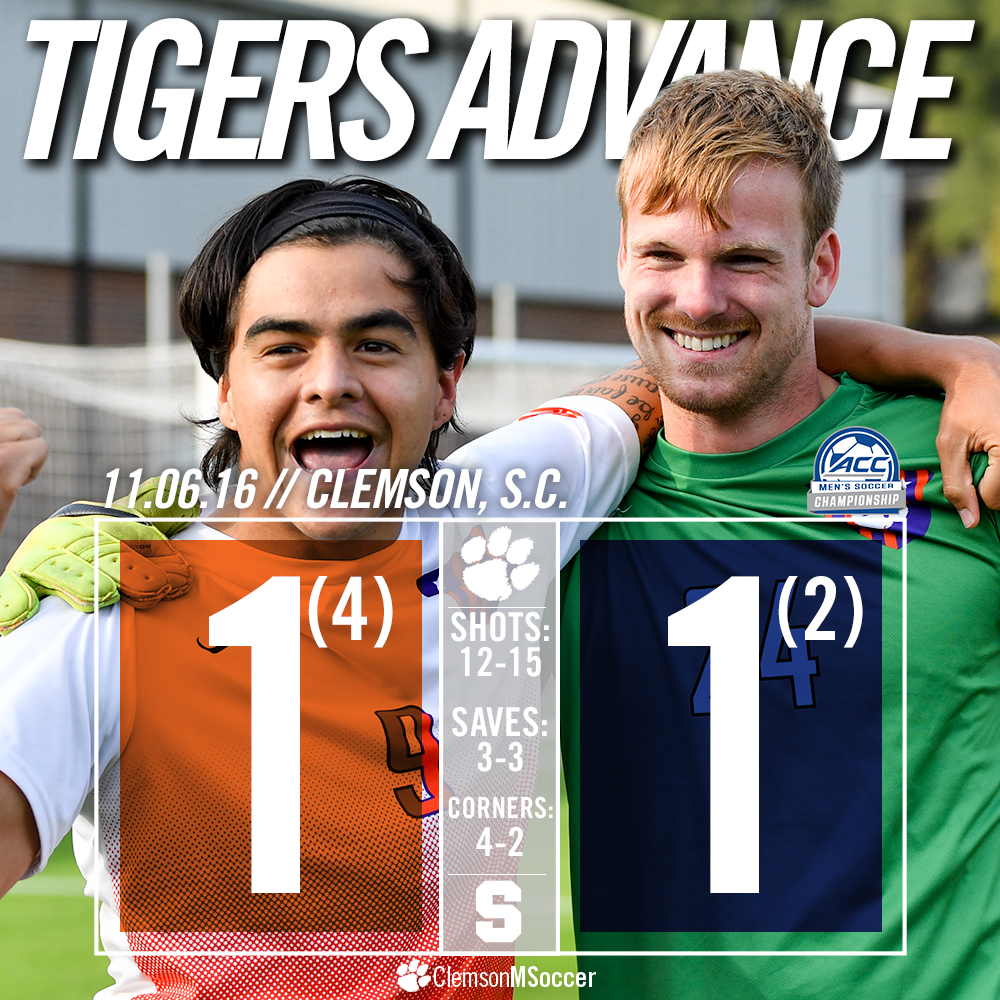 CLEMSON, S.C. – The third-ranked Clemson men’s soccer team advances to the ACC Tournament semifinals after a thrilling penalty shootout against seventh-ranked Syracuse. The Tigers move to 11-2-5 and host the seventh-seeded Boston College Eagles on Wednesday night at Historic Riggs Field at 7:00 p.m.

During the first 15 minutes of the match, Clemson held onto the possession in their attacking third but could only create one shot on target. Once both sides settled into the match play began to go from end to end. Junior Diego Campos had a breakaway opportunity but was unable to get enough on his shot to give the Tigers a lead as the two sides would head into the break tied at zero.

Just seconds into the second half Campos nearly gave the Tigers a 1-0 lead when his shot curled just past the post. Syracuse quickly countered and had a chance of their own before senior Alex Happi came up with a huge block inside the six-yard box. In the 66th-minute Campos got in behind the defense from a long ball played by sophomore Patrick Bunk-Andersen and slid the ball past Hilpert to give the Tigers a 1-0 lead. With four minutes remaining in the match a handball was called against the Tigers in the box, and Sergio Camargo put away his penalty chance to even the score at one, sending the match to overtime for the third straight time between Clemson and Syracuse.

In the first overtime junior, Michael Melvin curled a shot that went just wide of the post, and Saul Chinchilla had a shot blocked with a wide open net to keep the score level at zero. Neither side could find the game-winning goal in the second overtime, and the match would head to penalty kicks.

For the penalty shootout redshirt sophomore Brady Allardice was put in the net where he came up with two huge saves to put the Tigers in a great position. The stage was set for Campos, and he delivered by burying the game-winning penalty to give the Tigers a 4-2 advantage. With the win, the Tigers advance to the ACC Tournament semifinals for the second straight year.

In the match, Clemson took a total of 12 and produced four corners. Sophomore Ximo Miralles recorded three saves and moves to 9-1-5 overall.

The Clemson men’s soccer team returns to action in the ACC semifinals on Wednesday, Nov. 9 at 7:00 p.m. The Tigers face Boston College who upset the number one overall seed North Carolina by a score of 1-0.