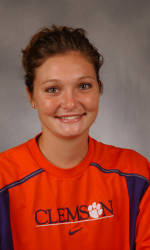 Clemson, SC-Elizabeth Jobe scored the winning goal in the game deciding penalty kick segment of overtime and goal keeper Ashley Phillips recorded her eighth solo shutout of the year, as Clemson advanced over Oklahoma State in the second round of the NCAA women’s soccer tournament at Clemson’s Historic Riggs Field.

Clemson will advance in the tournament against either Southern Cal or Stanford, at a site, date and time that will be announced on Monday.

There was no scoring in regulation o r the two 10-minute overtime periods, so officially the score goes in the record books as a 0-0 tie, but Clemson advances on penalty kicks by winning the penalty kicks, 4-2.

This Clemson team has now lost just one of its last nine matches and has not lost any of its six overtime matches this year. In fact, Clemson has not allowed a goal in any overtime period this year. That is testimony to the performance of Phillips, who has started every match this year. She was a preseason All-American who is now third in Clemson history in career saves.

Clemson did a good job defensively on Oklahoma State’s top scorer, Yolanda Odenyo, who took eight shots in the match, but never found the goal. Odenyo had a scoring opportunity with 31:34 left in the match when she received a crossing pass from Niccole Grimaldi. But, Phillips deflected her shot over the left corner of the net.

Clemson had a scoring opportunity with eight minutes left when Jobe passed the ball from the left wing to Kelly Schneider. She then passed the ball across the goal keeper box to Molly Johnson, but her shot from the right corner of the goal mouth was stuffed by Erin Stigler.

Even though there was a difficult direct sun on the goal at the East end of the field, neither team had a major scoring opportunity in the overtimes.

Clemson got off to a great start in the penalty kicks when Phillips stopped Ashlyn Brantley’s attempt. Brantley attempted to score in the left half of the goal, but Phillips made a punch save while moving to her right. Kelly Schneider, who has scored just one goal all season, then scored on Clemson’s first penalty kick to give Clemson a 1-0 lead in penalty kicks.

The Cowgirls Jessica Jarrell then attempted Oklahoma State’s third penalty kick, but her kick was wide to the right and over the goal. Clemson then countered with a goal by Britten Meyer, who beat Oklahoma State goal keeper Erin Stigler with a blast to the low right corner or the goal. It gave Clemson a commanding 3-1 lead.

Siera Strawser scored for Oklahoma State in the fourth round, but Elizabeth Jobe ended the match in Clemson’s favor when she scored in the low left corner of the goal.

“I would like to congratulate Oklahoma State, “said Clemson head coach Ashley Phillips did a nice job in goal, she is one of the best in the nation.

“This was a hard fought match, ” said Oklahoma State coach Karen Hancock. “Unfortunately, in our sport it goes down to penalty kicks in the postseason. It is hard to play on the road and get the result. My group played very hard today, but it just wasn’t enough. “