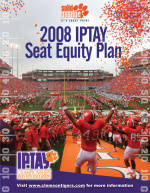 Clemson, SC – Clemson University is joining the other 19 schools ranked in the top 20 in the nation in average home football attendance in announcing a new seat equity plan for its season ticket holders. The plan was announced Monday by James E. Bostic, Jr., President of IPTAY, and by Director of Athletics Dr. Terry Don Phillips.

Clemson is the last team ranked in the top 20 in average home football attendance to develop a seat assignment plan based on donor levels. The plan will begin with the 2008 season, but current season ticket holders will be sent a personal letter outlining the plan during the final week of September.

“This is not a reseating of Clemson Memorial Stadium,” said Bill D’Andrea, senior associate athletic director for external affairs. “All 2007 season ticket holders will have an opportunity to maintain their current seats.”

The new plans were developed and approved by the IPTAY Board of Directors, Clemson’s Athletic Scholarship funding raising organization. “We approached this with five objectives in mind,” said D’Andrea.

“First, we must be competitive with the other BCS institutions. Second, we wanted to create a plan that is fair, equitable and reasonable. Third, we wanted to provide opportunities for current donors to retain their seats, as well as provide higher giving donors the opportunity to purchase seats in the lower deck between the 25-yard lines, if available.

“Fourth, it is essential to generate revenue for IPTAY so we can continue to provide scholarships and other support for our 19 athletic programs. And, finally, we will re-evaluate the system every five years.”

Some donors will have to increase their level of giving to continue to have the same seats. However, a study of the 2007 seating indicates that only 37.1 percent of the donors could be financially impacted by the 2008 IPTAY Seat Equity Plan, if those donors wish to maintain their current seat location.

“We had lengthy conversations with institutions from around the nation, including Ohio State, Michigan, Alabama, Georgia, and LSU, and of course also examined the seat/equity plans of many of our natural rivals, including Virginia Tech, Georgia Tech, NC State and South Carolina.”

In summary, D’Andrea said, “The 2008 IPTAY Seat Equity Plan will create a fair and rewarding system for all IPTAY donors while reaffirming its commitment to its goal of providing excellent scholarship opportunities for student-athletes. Additionally we also have the goal of continuing to provide those student-athletes with the best possible facilities.”