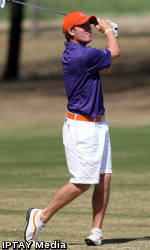 CLEMSON, SC – Clemson stands in a tie for 14th place after two rounds of the Insperity Augusta State Invitational at Forest Hills Country Club in Augusta, GA. The final round will be held on Sunday. Clemson was playing its first tournament of the year without Corbin Mills, who will play in the Masters next week. The Tigers have not finished out of the top six in any tournament this year with Mills in the lineup.

The Tigers struggled in the opening round with an 11-over par 299 score. Crawford Reeves was the only Tiger golfer to shoot par or better. He played the last two holes at three under par, as he had a birdie four on the par five 17th, then scored an eagle two on the par four 18th hole.

Clemson improved by 16 shots in the second round over its first round score and shot a five under par 283. The Tigers had three players score under par for that round. Billy Kennerly led the way with a three under par 69. He had five birdies and two bogeys. Thomas Bradshaw shot a two under par 70 in the second round. He got off to a bad start with a double bogey, but had a streak of four straight birdies on holes 9-13. He finished with seven birdies in the round overall.

Reeves was Clemson’s third player with an under par score in the second round. The junior had a one under par 71, as he had 15 pars, two birdies and just one bogey. Reeves now has a streak of eight straight rounds at par or better. He stands in 29th place after two rounds with a 143 score.

After Reeves, Kennerly is the second best Tiger in the tournament with an even par score of 144 and he stands in a tie for 32nd place.