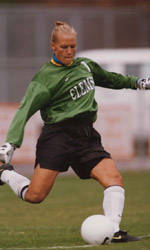 Clark, a senior Language and International Trade Major had five assists for the Lady Tigers from her defender position.

Carson, a special education major, allowed only 19 goals for a 0.89 goals allowed average. The senior goalkeeper had 83 saves this season.