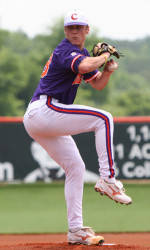 Lefthander Chris Dwyer, who played for the Tigers in 2009, was rated as the #7 prospect in the Carolina League by Baseball America on Monday. The Swampscott, MA native had a 6-3 record and 2.99 ERA in 84.1 innings pitched over 15 starts with Wilmington, the Advanced A affiliate of the Kansas City Royals. Dwyer allowed just 79 hits and 33 walks with 93 strikeouts. He also made four starts for AA Northwest Arkansas and was 2-1 with a 3.06 ERA.

As a Tiger in 2009, Dwyer was the Friday starter on the team that advanced to the Tempe (AZ) Super Regional. In 86.0 innings pitched over a team-high 17 starts, he had a 4.92 ERA and .236 opponents’ batting average along with 95 strikeouts against only 33 walks.

Dwyer was a fourth-round draft pick (#122 overall) of the Royals in 2009. He became the first-ever first-year freshman from a four-year college selected in the Major League draft.