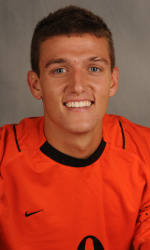 With the win, Charlotte improves to 4-4 overall, while Clemson falls to 1-5-1 overall this season. Tonight’s match marked the fourth overtime match this season for the Tigers. So far this season, Clemson has a 1-2-1 record in these matches.

Clemson scored midway in the first half. Jack Metcalf scored on an unassisted goal to give the Tigers a 1-0 lead in the 19th minute.

Charlotte scored 3:45 later when Cuero scored on a header with an assist by Donnie Smith.

Cuero scored the game winner in the second overtime period in the 105th minute as he scored on a 30-yard shot with an assist by Justin Tucker.

“As well as we played against Virginia on Saturday night, we played that poorly against Charlotte tonight,” said Clemson Head Coach Mike Noonan. “Cody Mizell made some spectacular saves tonight. We continue to fight hard, and we had our chances tonight but could not capitalize.”

Clemson’s goalkeeper, Cody Mizell finished the night with a season-high nine saves. The freshman now has 29 saves on the season.

The Tigers will play host to perennial power St. Louis on Friday night at 7:00 p.m. at Historic Riggs Field.