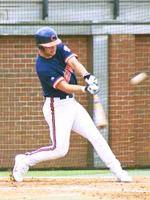 Matt Avery scattered four hits in a complete game to lead Virginia to a 3-1 victory over #23 Clemson in game two of a doubleheader on April 10 at UVa Baseball Stadium. The Cavaliers, who upped their winning streak to nine games, swept the three-game series and improved to 29-7 overall, including 11-4 in ACC play. The Tigers fell to 18-13 overall, 6-3 in the ACC. Before the series, the Cavaliers had not beaten Clemson in back-to-back games since 1974 and not swept the Tigers in a three-game series since 1972.

Virginia started the scoring with a pair of runs in the first inning. Matt Street led off with a solid single through the left side and stole second base. After Mark Reynolds walked, Ryan Zimmerman sacrificed the runners up a base. Joe Koshansky followed with a long fly ball to left-center to bring home Street. Matt Dunn then slapped a single to left field to plate Zimmerman from third base and give the Cavaliers a 2-0 lead. It was Dunn’s sixth hit in as many at-bats over three games.

Reynolds gave the Cavaliers a 3-0 lead in the third inning with a solo homer to left-center. It was his eighth homer in 2004.

Clemson finally got on the board in the fourth inning with one run, but could have scored more. Herman Demmink led off with a double to left-center and Kris Harvey followed with a walk. Then Brad McCann hit a double off the glove of Street in right field. Demmink, who was tagging on the play, just beat the relay throw, but home plate umpire Tim Clougherty did not indicate a safe or out sign, because the catcher never tagged Demmink and Demmink’s “hook” slide missed the plate. But an alert Demmink, who was about five feet from the plate, quickly stepped on home plate and was ruled safe. Virginia avoided further damage when Avery struck out Lou Santangelo, Andy D’Alessio, and Travis Storrer with runners on second and third to end the inning.

Virginia threatened to add to its lead in the seventh inning, but reliever Collin Mahoney got out of the jam. Tom Hagan led off with a single, as he slapped an 0-2 pitch to left-center. Scott Headd’s sacrifice bunt, his 12th of the year, advanced Hagan to second. Kyle Werman moved Hagan to third on an infield single to shortstop. Triplett was playing Werman in the “hole,” as he hit the ball where Triplett would normally play. Tim Henry then loaded the bases when he dropped a bunt for a hit, but the runner remained at third. Fortunately for the Tigers, Mahoney induced an inning-ending 1-2-3 double play.

But the Tigers could not muster a late-inning rally, as the last seven batters were retired in order to end the game. Eleven different players accounted for the game’s 11 hits (Virginia 7, Clemson 4). The game lasted only 1:57.

Clemson will return home to play host to Winthrop Tuesday at 7:15 PM.