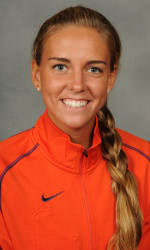 Student-Athletes must have earned a 3.0 for the previous semester and have maintained a cumulative 3.0 GPA during her academic career. Magnusson went 18-10 in singles in her sophomore season, and finished 18-17 in doubles.

Clemson has had at least one player named to the team in each of the six years of the award. The Tigers went 21-11 in 2011, reaching the NCAA Sweet 16 for the fifth straight time and the seventh time in the last eight seasons.