Cagle, who was named a USA Softball Collegiate Player of the Year Top 25 Finalist, dominated in Clemson’s first-ever matchup against South Carolina and series sweep over NC State, its fifth series sweep over a conference foe this season. Cagle helped Clemson secure first place in the ACC standings after leading the Tigers in batting average (.615), slugging percentage (1.462), on-base percentage (.737), total bases (19) and walks (6), four of which were intentional, last week. Cagle also registered three home runs, two doubles and five RBI, while going 3-0 in the circle, including one shutout, with a 1.27 ERA and tallied her fifth save of the season. In the inaugural Palmetto Series matchup, Cagle smacked a two-run homer in the top of the first before claiming her ninth shutout of the season after scattering just three hits against the Gamecocks. Cagle continued to roll the Tigers’ four-game series against NC State in which she hit .750. She also recorded a hit in all four games against the Wolfpack to extend her current hitting streak to 17 games, and was intentionally walked in three-out-of-four games against NC State. Against South Carolina (April 21) and in game No. 1 NC State (April 23), Cagle also registered her seventh and eight performances of the season, respectively, in which she homered and was the winning pitcher.

Cagle (23-3) currently leads the ACC in ERA with an average of 0.94 earned runs surrendered per seven innings pitched. She also leads the conference in wins, saves (5) and appearances (31). Cagle, who is hitting .411 on the season, is currently the only pitcher in the nation that has a batting average of at least a .400 batting average. 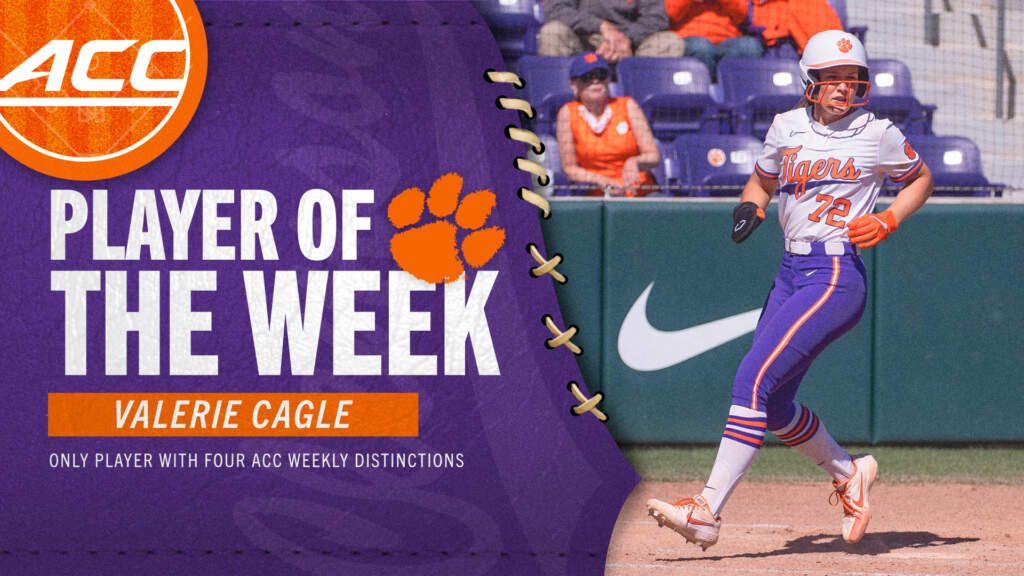