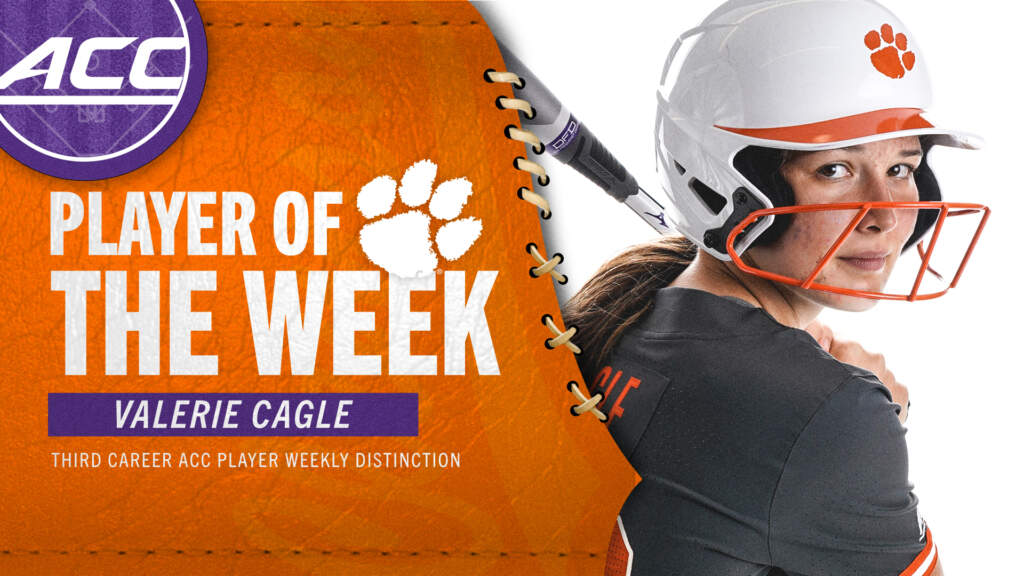 CLEMSON, S.C. – Clemson Softball second-year freshman ace Valerie Cagle has been named the ACC’s Player of the Week, the conference office announced on Wednesday. With Wednesday’s announcement, Cagle, who was named the NFCA Player of the Week yesterday, garnered her third ACC Player-of-the-Week distinction of her career.

Cagle led Clemson to its fifth consecutive series sweep and 17th straight victory at Louisville this past weekend, helping the Tigers become one of just three teams in the country with at least 17 straight wins. In addition to making a huge impact in the circle, Cagle was exceptional at the plate after hitting .643 (9-for-14) with two home runs, six RBIs and slugged 1.143. In Clemson’s third game against the Cardinals, she went 3-for-4 with an RBI. Her peak performance offensively came in Sunday’s victory when she went 3-for-3 with a pair of home runs, a double and accounted for all four of the Tigers’ RBIs, in addition to recording her second complete-game win of the series. The Yorktown, Virginia native set the tone with a 2-RBI double to give Clemson its lead, which it never relinquished for the remainder of Sunday’s series finale. Cagle also homered in back-to-back at bats to record her second multi-home-run effort of the season and fourth of her career. Cagle’s .643 batting average contrasted with her opposing batters’ average of .182.

In the circle, Cagle, the ACC’s wins leader, improved to 12-1 on the season after going 2-0 in two appearances with a 0.39 ERA after surrendering just one earned run and fanning 28 batters. In the series opener, Cagle pitched an 11-inning complete-game shutout after tossing 176 total pitches in what was nearly a three-hour game contest. After striking out a career-high 14 batters in game No. 1, Cagle bookended Friday’s performance in Sunday’s finale as she registered another 14-strikeout performance, but this time in 7.0 innings pitched. The only earned run Cagle surrendered this past weekend was on a fly ball that the Clemson left fielder lost in the sun and hit the ground, allowing a Louisville base runner, who was one first, to score.

Last season, Cagle was the only player in the conference to earn ACC Player of the Week honors twice (Feb. 18 & March 3).

Up next, Cagle and No. 20 Clemson (20-2, 12-2 ACC) return to action on Friday (March 26) to kick off a four-game series, which holds first-place implications in the ACC standings, against No. 11 Duke (24-1, 12-1 ACC) at McWhorter Stadium. The Tigers and Duke are two of just three teams in all of Division-I currently riding a win streak of at least 17 games.