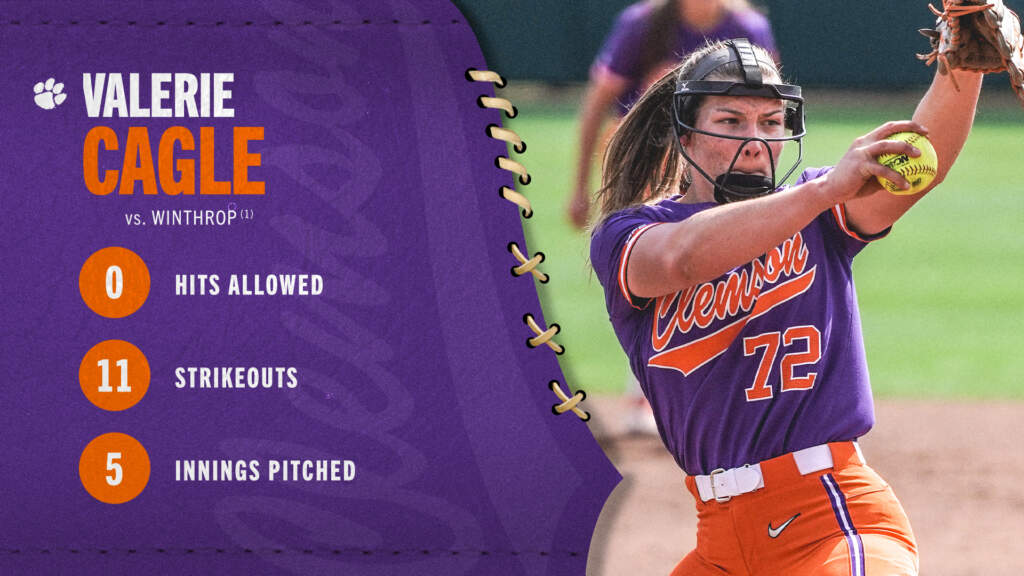 CLEMSON, S.C. — Clemson righty ace Valerie Cagle (17-3) tossed her first career complete-game no-hitter in game No. 1 of Tuesday’s doubleheader against Winthrop (20-20, 7-7 Big South) at McWhorter Stadium. Facing just two batters over the minimum, Cagle posted 11 strikeouts and surrendered only one walk. She also went 2-for-2 at the plate with one RBI and one walk. Cagle and the Tigers shut out the Eagles 9-0 in nearly five innings of play as outfielder Morgan Johnson’s two-run home run in the bottom of the fifth lifted Clemson above the eight-run threshold to end the game. With the win, Clemson improved to 27-4 overall on the season.

In addition to a stellar performance in the circle, Cagle helped the Tigers offense click on all cylinders immediately. She knocked in the first run for the Tigers in the bottom of the first on an RBI-double to score Mckenzie Clark, who began the inning with a lead-off walk. Following a pair of consecutive walks, shortstop Ansley Gilstrap singled through the left side to bring home Cagle and rake in her 76th career RBI. Designated player Abi Stuart extended the Tigers’ lead to 4-0 with a two-RBI double, which was also the third RBI hit of the inning to left field.

In similar fashion, Stuart registered her 16th RBI of the season with an RBI single ripped down the left side to improve Clemson’s lead, 5-0. Then, Cammy Pereira laid down a successful squeeze bunt to the Winthrop pitcher, who could not get pinch runner Carlee Shannon out at the plate, to extend the Tigers’ lead to 6-0.

In the fifth inning, Clark registered her ACC-leading sixth triple of the year to right field, which scored Pereia from second base. Then Johnson, who came in to pinch hit, ripped a two-run homer to center field to solidify the win for the Tigers in five innings. Johnson’s home run was her third of the season and second in walk-off fashion at McWhorter Stadium, having done so in Clemson’s series finale against Elon (Feb. 28).

Winthrop starting pitcher Madyson Watson (11-9) suffered the loss after pitching a complete game in the circle for the Eagles.

This game was designated as Clemson’s Pride Game, celebrating the LGBTQ+ community, in conjunction with Athlete Ally and the Harvey and Lucinda Gantt Multicultural Center. To learn more about how Clemson University supports the LGBTQ community, visit the Gantt Center here.

Up next, Clemson and the Eagles return to McWhorter Stadium for game No. 2 of Tuesday’s doubleheader. Tuesday’s nightcap is set for 6:20 p.m. on ACCNX.