CLEMSON, S.C. – After just the second week of its inaugural season, the Clemson Softball team swept ACC Player and Pitcher of the Week honors, the conference office announced Tuesday. Clemson freshman Valerie Cagle was tabbed the ACC Player of the Week, while redshirt freshman Logan Caymol was named the league’s ACC Pitcher of the Week. Both Cagle and Caymol led Clemson to a 5-1 week in the Tigers’ first six games at Clemson Softball Stadium, and an undefeated slate in Big Ten/ACC Challenge (Feb. 14-16) action.

In addition to three appearances in the circle, Cagle led the Tigers in batting average (.500) and RBI (13), and tied for a team-best four home runs on the week. In Clemson’s first-ever home win against Western Carolina on Wednesday, Cagle hit the Tigers’ first-ever home run (252 ft.) at Clemson Softball Stadium. In Clemson’s 21-2 win over Maryland on Saturday, Cagle went off with two homers, including a grand slam, eight RBIs, and went 4-for-5 at the plate. Her grand slam was the Tigers’ second of inning No. 2, which made Clemson just the seventh team in NCAA Division I history to accomplish the feat in an inning. She then homered again versus Michigan State on Sunday, which gave the Tigers a 2-0 lead in the first. Cagle also went 2-for-3 at the plate in Sunday’s 8-4 win over the Spartans. 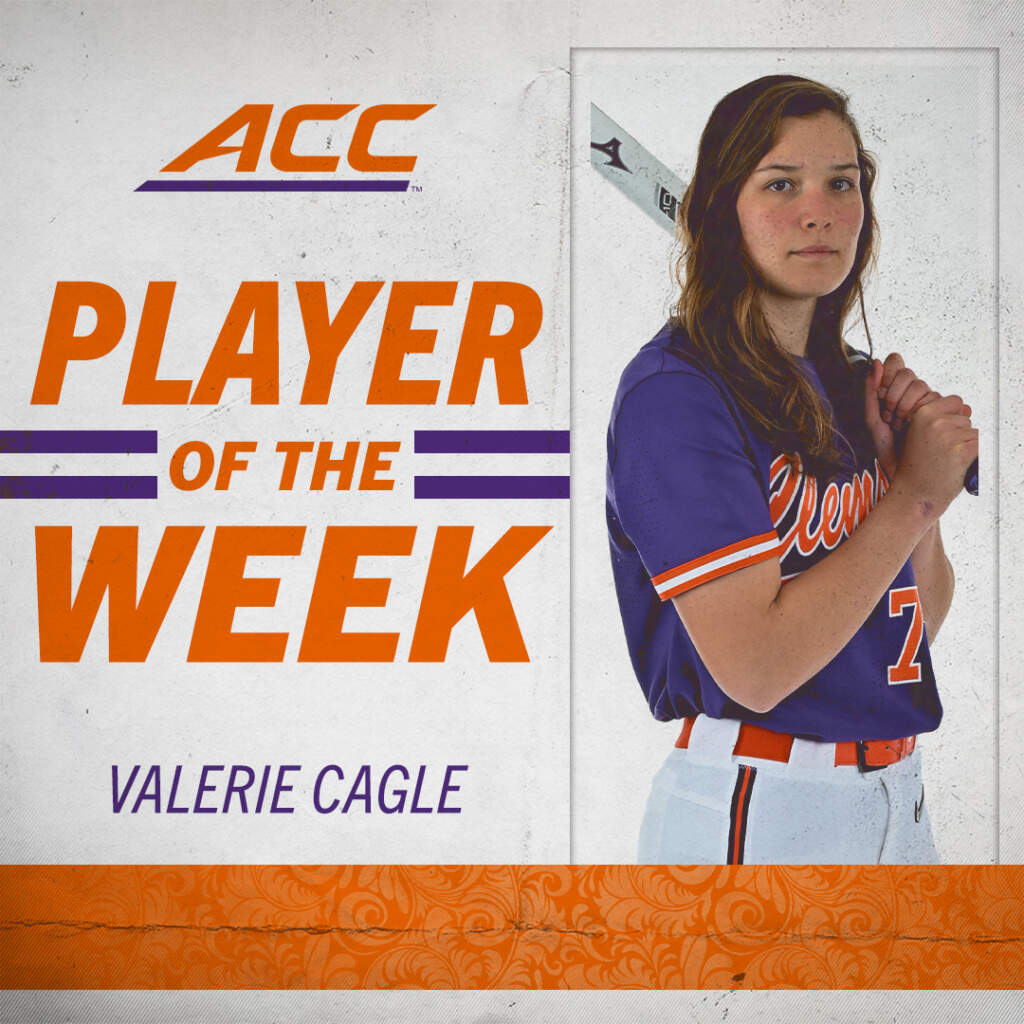 Caymol went 4-0 with three starts and gave up just one run in her 18.0 innings pitched (0.39 ERA). The Buford, Georgia native recorded 25 strikeouts, including 11 in the Clemson’s 8-0 win over the Catamounts on Wednesday, which lasted only five innings. Caymol’s performance against WCU was also her first career complete-game no-hitter. She then threw another complete game in Clemson’s 2-1 win over Michigan State on Saturday. 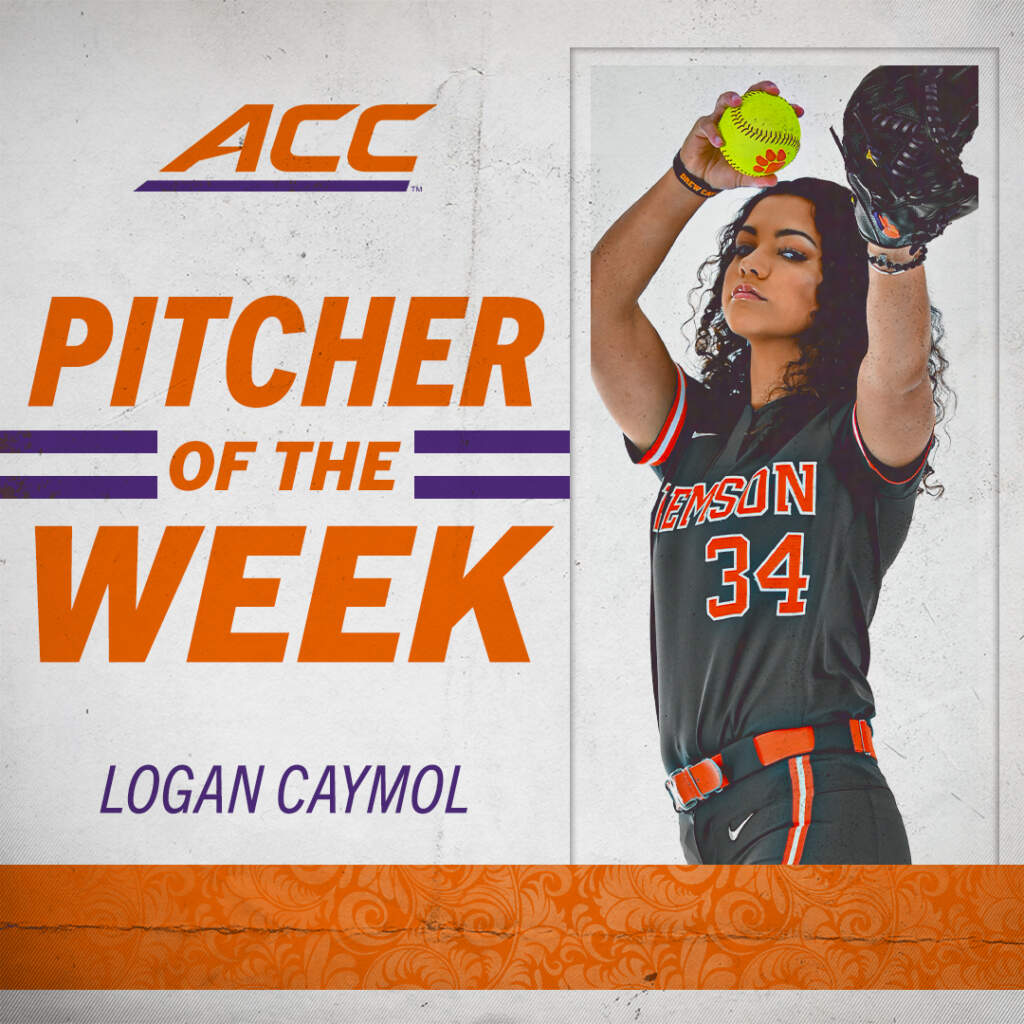 Clemson (7-4) takes on UNCG (4-4) on Tuesday in its second true road contest of the season at UNCG Softball Stadium. First pitch is set for 3:30 p.m. and is scheduled to stream on SoCon Digital Network. For live stats, visit bit.ly/ClemsonSBStats. 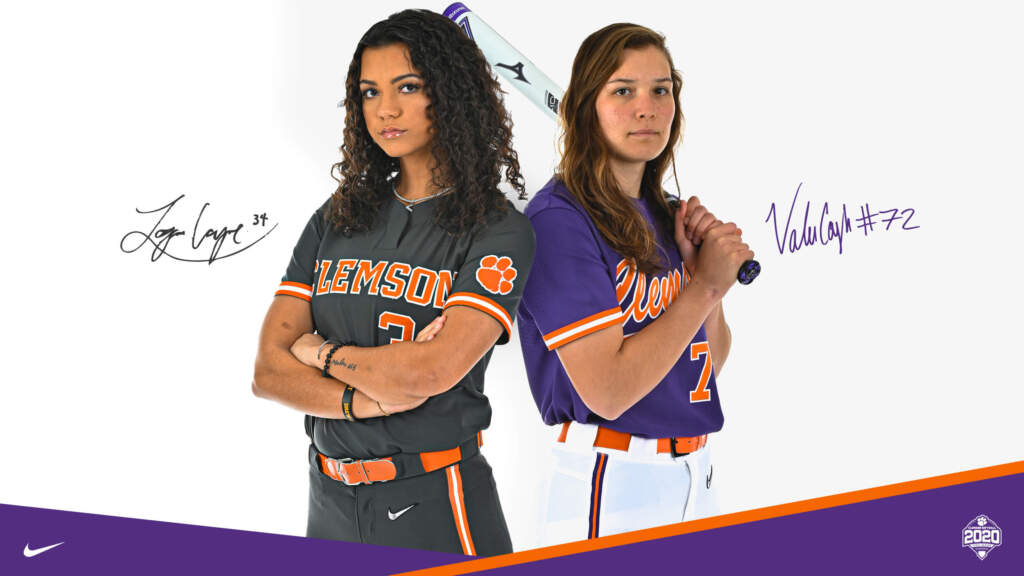