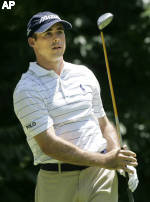 CLEMSON, SC – Former Clemson All-American Jonathan Byrd made a hole-in-one on the fourth playoff hole to win the Justin Timberlake Shriners Hospital for Children Open at the TPC Summerlin in Las Vegas, NV. It is believed to be the first time in the history of the PGA Tour that a player won an event with a hole-in-one on the final hole.

Byrd was an All-American at Clemson from 1997-00. He started on four Clemson teams that finished in the top 10 and he became the first Clemson golfer to make first-team All-ACC four times.

Byrd finished the 72-hole event on Sunday afternoon at 21-under par 263 after rounds of 66-63-66-68. He was tied with Cameron Percy and Martin Laird and the three players went into a playoff. All three players made pars on the first three playoff holes.

Byrd had the honors and struck his six-iron on the 204 yard hole to within 10 feet of the pin. The ball then took two hops and rolled into the cup. Byrd could not see the shot go in. Percy and Laird then hit their respective drives into the water and Byrd had his fourth PGA Tour win.

“I am in shock,” said Byrd in a television interview on the Golf Channel after the win. “I could not see it, but I knew I hit it perfect. I just kept saying I needed to hang in there. My caddie told me we needed to birdie out to get in the playoff when we were three down standing on the 15th tee.”

That is just about what Byrd did coming down the stretch. He made birdie on the 15th, 16th and 17th holes in regulation, then made par on 18 to tie Laird and Percy. Percy had finished earlier and Laird was Byrd’s playing partner.

On the third playoff hole, Byrd was nearly eliminated. Playing the 18th hole for the second time in the playoff, Byrd hit his second shot to within a foot of a water hazard next to the green. But he got up and down for par.

This was Byrd’s sixth career hole in one. The victory gives him an exemption on the PGA Tour for the next two years and it should also give him an invitation to the 2011 Masters. He moved up to 52nd on the PGA Tour money list for this year and he won $774,000 for his victory on Sunday.

Byrd’s win means a former Clemson golfer has now won a PGA Tour event each of the last seven years. Byrd also won the 2002 Buick Challenge, the 2004 BC Open and the 2007 John Deere Classic. Byrd’s four wins are the most by a former Tiger golfer.

But no victory has been more dramatic…perhaps in the history of the PGA Tour.