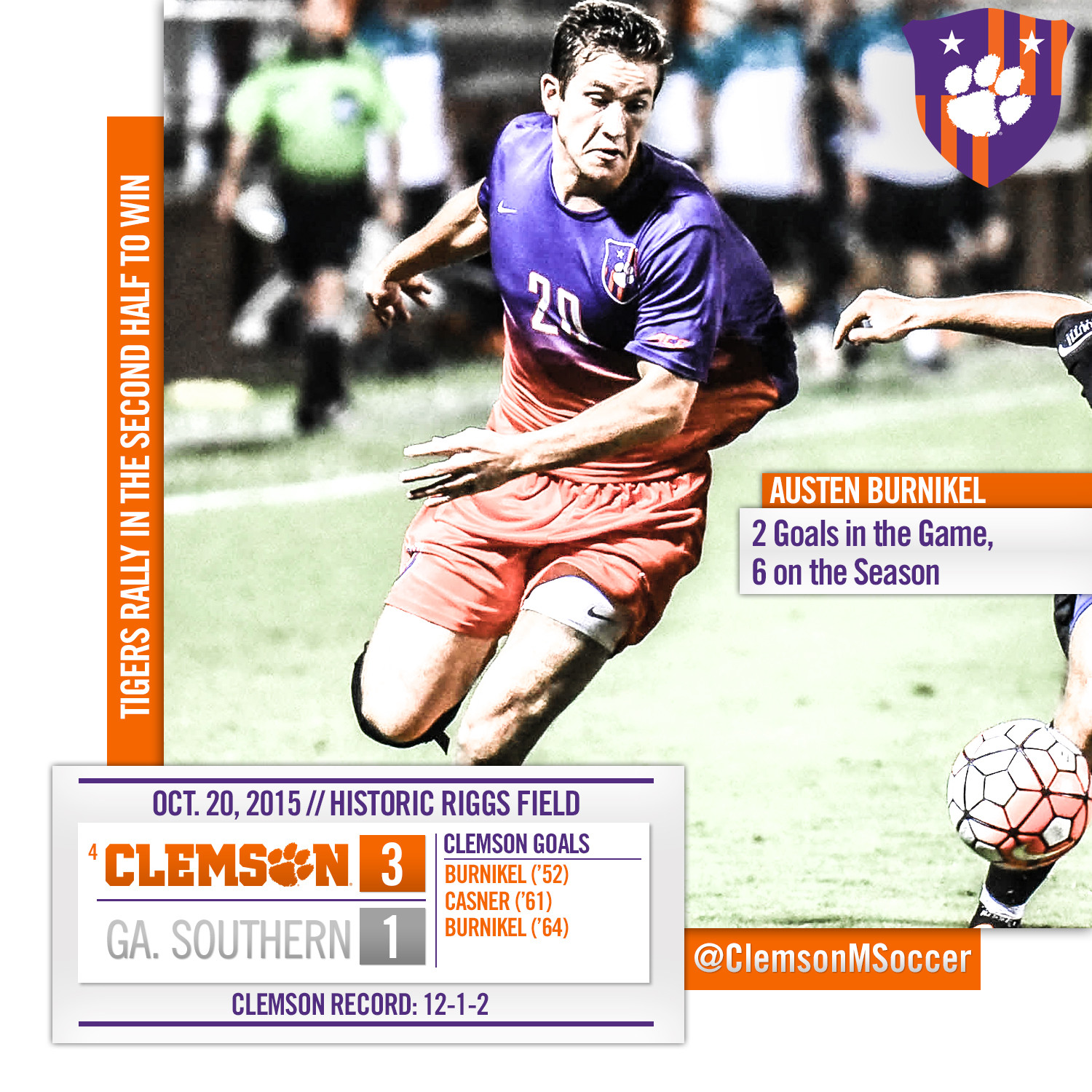 CLEMSON, S.C. – Junior Austen Burnikel scored two goals, and the Tigers scored all three of their goals within a 12-minute span in the second half in order to defeat Georgia Southern 3-1 on Tuesday night at Historic Riggs Field. With the win, the fourth-ranked Tigers improved to 12-1-2 on the season, while the Eagles fell to 4-6-1.

“It’s not about the result, it’s about the process of getting better, and we have to be more consistent in our approach,” said Head Coach Mike Noonan. “You have to look at the positives from a game like this, and several guys who haven’t played a lot – John Cajka, Johnny Heckman, Grayson Raynor and Tyler Rider – made a difference and really changed the game for us. I believe we experienced a bit of a hangover tonight after an emotional win at Syracuse on Saturday. That said, we’d better find our purpose by Friday night when we resume ACC play.”

Neither team scored during the first half of play, however, both got on the board quickly in the second half. Junior Austen Burnikel scored the Tigers’ first goal at the 51:16 mark after he intercepted a pass between Georgia Southern defenders in front of the goal and scored from 10 yards into the left side of the net. Just over a minute later, the Eagles tied the game when Christian Duncan got his own rebound off of a save and put the ball in the net at 52:25.

In the 61st minute, senior T.J. Casner netted his seventh goal of the season. Junior Alex Happi sent a short pass back to Casner who shot from 20 yards into the lower right corner of the net. Burnikel followed shortly after, in the 64th minute, with his second goal of the evening. Sophomore Diego Campos put a long forward pass on the ground to redshirt senior Kyle Murphy, who crossed the ball in from the left side to Burnikel, who scored from close range.

Casner and Burnikel now rank first and second on the team in scoring with 15 and 14 points, respectively. Redshirt junior Tarbell posted five saves and improved to 12-1-2 in goal for the Tigers this season.

The Tigers will be back in action at Historic Riggs Field this Friday, Oct. 23 for a 7 p.m. contest against Boston College. The game is the team’s final regular season home game, and during a pregame ceremony, the program will honor seniors Casner, Murphy, Paul Clowes and Kyle Fisher, as well as senior equipment manager Keith Tormey.