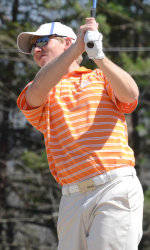 CLEMSON, SC – Jacob Burger finished with a 72-hole total of 286 to record a fourth place finish at the 2011 South Carolina State Amateur at Colleton River Plantation at Bluffton, SC. Burger was one of five current Clemson golfers to finish in the final top 15 in the four-day tournament.

Burger had been one of just two players to shoot under par for each of the first three rounds on the par 72 hole course. But he was two-over-par with a 74 on Sunday. The course was very difficult as just one player shot in the 60s. Burger’s fourth place finish was his second straight top 10, as he was coming off an eighth place finish at the Palmetto Amateur. Burger was one of just five players to break par for the tournament.

The second best player with ties to Clemson was associate head coach Jordan Byrd, who finished with an even par 288 score for the four rounds. Byrd had rounds of 76-69-69-74 to finish in a tie for sixth place, his best finish at the South Carolina Amateur since he was second in 2006. Byrd was the only player in the field to shoot in the 60s in the middle two rounds.

McCuen Elmore and Thomas Bradshaw gave the 2011-12 Clemson golf team three players in the final top 10. Elmore finished at 290, two-over-par, to finish eighth, while Bradshaw finished at 291, good enough for ninth place. It was the second top 10 of the summer for each Clemson golfer.

Crawford Reeves, whose brother Austin Reeves won the tournament with a five under par score of 283, had a solid tournament with a 293 score. That +5 score for 72 holes was good enough for 15th place. Stephen Behr, who will be a freshman on the Clemson team this year, also finished with a 293 score and a 15th place finish. Reeves and Behr both had the same scores (72-73) over the last two rounds.

Mike Muscatell had the best round on Sunday among players with ties to Clemson as he carded a 72, one of just five rounds at par or better for the entire field in the last round. Muscatell finished tied for 23th with a 296 score. David Dannelly finished in 37th place with a 300 score. He had even par rounds in each of the two middle rounds.