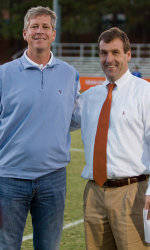 CLEMSON, SC – Bruce Murray who helped lead Clemson to two National Championships in men’s soccer in 1984 and 1987 and later starred with the U.S. Men’s National Team was inducted into the National Soccer Hall of Fame in June.

Murray, a veteran U.S. Men’s National Team midfielder and forward, tallied 86 games and 21 goals throughout his career for the United States. When Murray retired from the national team in 1993, he was its all-time leader in both caps and goals. Murray made his first full international appearance against England in 1985 and his last was against Venezuela in 1993.

Murray played several seasons with the Washington Starts and Maryland Bays of the ASL/APSL and one season with the Atlanta Ruckus of the A-League.

At Clemson, Murray won the Hermann Trophy as the top men’s soccer player in the country in 1987. He led Clemson to two NCAA Championships in 1984 and 1987. He was a two-time All-American. Murray scored the winning goal in three NCAA Tournament games for the Tigers in 1987 on the way to the National Championship.

He was named first team All-ACC in 1985 and 1987. He was also the first Clemson player in history in the 40-40 club (over 40 goals and 40 assists in a career). He is sixth in school history in total points with 142 and seventh in total goals with 48. Murray is second in school history with 46 career assists.

In the 84 games he played during his career, Murray had either a goal or an assist in 56 games. He played for the U.S. National Team and was the United State’s all-time leading scorer when he retired from soccer. He is also a member of the ACC 50-year Anniversary Team and was named one of the top 50 male athletes in ACC history in 2003, the 50th year of the ACC.

Joining Murray in the 2011 induction class include, Cobi Jones, the U.S. Men’s National Team’s all-time leading cap winner and long-time member of the LA Galaxy, Eddie Pope, a perennial anchor of the U.S. defense for nearly a decade and winner of three MLS Cups with D.C. United, and Earnie Stewart, a three-time World Cup veteran.