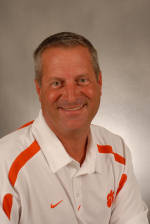 CLEMSON, SC – Todd Bramble has accepted the head women’s soccer coaching position at the University of Alabama, the University of Alabama Athletic Department announced on Friday afternoon. In seven seasons as the Lady Tiger head coach, Bramble led the team to seven NCAA Tournament appearances, two trips to the Sweet 16 and one berth in the NCAA Elite Eight.

“I would like to thank President Barker, Dr. Phillips and the athletic administration for the wonderful experience I have had as a member of the Clemson family. Being here for the past 13 years has provided my wife and I with great friendships and memories that will last a lifetime,” said Bramble.

“I want to also thank all the players, past and present, that I have been able to coach. It truly has been an honor to be associated with them.”

“I couldn’t possibly leave Clemson without also thanking Coach Trevor Adair. He gave me my start in coaching, brought me to Clemson, and has been a tremendous friend and role model,” he continued.

“I leave here feeling comfortable with the current state of the program. Coming off another NCAA tournament year, with an incredibly talented recruiting class waiting in the wings, I fully expect the winning tradition that is in place will not skip a beat.”

In seven years at the helm of the program, Bramble collected an 80-51-17 overall record including a 27-24-9 mark in Atlantic Coast Conference games. He did not have a losing season in seven years with the Clemson program. Five of his Lady Tiger teams were ranked in the top 25 of the final national polls and his teams finished in the top three of the ACC three times. Bramble recorded 18 wins over top-25 opponents during his Clemson head coaching tenure including three this past season.

Bramble’s 2001 team reached the NCAA Sweet 16 and was ranked 11th in the final national poll. In 2006, he led the Lady Tigers to the program’s fourth trip to the NCAA Elite Eight and a 14th-place final ranking. That team made NCAA history by advancing three consecutive games in tournament play by winning penalty kicks.

In 2007, the Lady Tigers advanced to the NCAA Second Round, defeating Charlotte 4-2 before falling to #15 Tennessee 1-0 in double overtime. Clemson finished the season with a 10-6-5 overall record and an 8-2-1 mark in games played at Riggs Field. Three Lady Tigers earned All-ACC honors and two players were named to the ESPN The Magazine Academic All-District Team for 2007.

From 2001-07, four of Bramble’s student-athletes were named All-Americans and one, Deliah Arrington, was named ACC Player of the Year in 2002. In addition, he coached 22 All-ACC selections and seven ACC All-Freshman team members. Bramble also coached goalkeeper Ashley Phillips, who, in 2007, was the Lady Tiger soccer programs first-ever player named to the Hermann Trophy Preseason Watch List.

Bramble’s teams had an equally impressive record in the classroom, as his student-athletes earned seven NSCAA Academic All-America awards during his seven seasons at Clemson. The Lady Tigers posted a 3.0 or better cumulative team grade point average all 13 semesters that he led the team and recorded a 3.25 or better team GPA for the last seven semesters.

In addition to spending seven years as the Lady Tigers’ head coach, Bramble was the top assistant coach for Trevor Adair Clemson men’s soccer team for five years from 1995-99 and coached with Adair for four seasons at Brown prior to coming to Clemson.