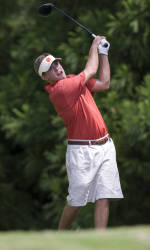 Clemson, SC – Eight members of the Clemson 2010-11 golf team were in action in amateur golf tournaments over the weekend. Brewer Bradshaw has had the most impressive performance as the rising sophomore has reached the finals of the South Carolina Amateur Match Play Championship.

Bradshaw will play veteran Todd White in the championship match on Sunday at the Grand Dunes Club in Myrtle Beach, SC The native of Columbia, SC who will be a sophomore on the Clemson team next year defeated Charles Valluzzo of Mt. Pleasant, SC in the first round, 2 and 1, Rick Cloninger of Fort Mill, SC in the second round, 3 and 1, and Clint Tolleson of Spartanburg in the third round, 4 and 2. Tolleson is a member of the South Carolina golf team so that was a Clemson vs. South Carolina match up.

That was nothing new for Bradshaw whose mother, Sherry, is a former Clemson cheerleader and his father, Bill is a former University of South Carolina quarterback.

Bradshaw then defeated Parker Allen of Blythewood in the quarterfinals in 20 holes. Bradshaw made a 50-foot putt for birdie on the 20th hole to win the match in dramatic fashion. Bradshaw will attempt to be the second consecutive golfer to win the South Carolina Match Play title. Crawford Reeves, who will be a sophomore on the Clemson team next year, won the tournament in 2009.

David Dannelly, a transfer from Coastal Carolina who will be eligible to play for the Tigers this coming year, reached the Elite Eight of the South Carolina Match Play. He defeated Chad Siefert of Simpsonville in the first round 3 and 2, and Brad Still of Spartanburg, SC in the second round 3 and 1 before losing to Parker Allen of Blythewood in the third round 3 and 2. Dannelly, a native of Easley, SC, had shot rounds of 70-65 to finish second in the 36-hole qualifier.

Two other Tigers qualified for the match portion of the championship. McCuen Elmore, who will be a red-shirt junior on the Clemson team next year, reached the second round of match play. Elmore beat Chris Mitchell of Prosperity, SC 1-up in the first round before losing to Jones Brown of Columbia, 3 and 2 in the second round. Elmore had finished seventh in the stroke play qualifier with rounds of 71-69.

Will Ovendon reached the match play after firing rounds of 74-68 to finish 13th in the qualifier. He lost in the first round of match play to Brad Sill of Spartanburg, 2 up.