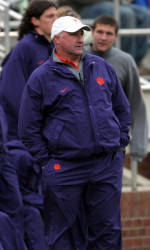 NEWTON, Mass. – Sophomore Shawn Chin and freshman Edvin Worley each scored one goal to lead Boston College to a 2-0 win over Clemson in an Atlantic Coast Conference men’s soccer match at the Newton Campus Soccer Complex at Newton, MA on Halloween Night. Alejandro Bedoya had two assists for the Eagles.

Boston College improves to 8-6-2 overall and 4-3 in the ACC. Clemson is now 5-8-2 overall and 3-4-1 in the ACC. Boston College was ranked as high as number two in the nation this year. Currently they are not in the polls. This was the final ACC match for the Tigers in the regular season. The Tigers have defeated two top-10 teams during ACC play this season, as Clemson defeated fourth-ranked Maryland and seventh-ranked North Carolina.

Chin got BC on the scoreboard early, netting his second goal of the season at 3:34. Chin settled the ball after passes from Worley and Bedoya and sent a 10-yard shot into the goal.

Boston College went ahead 2-0 late in the second half at 84:26. Bedoya redirected a long free kick from senior Idan Shefler that Worley one-timed into the net. The goal marked his fourth of the season.

Statistically, the Eagles outshot the visiting Tigers 18-3. Joseph Bendik made two saves in net for Clemson, which was credited with a team save off a Worley head ball at 64:04.

This was the fifth meeting between Clemson and Boston College on the soccer field, and it marks the first time ever that the Eagles have defeated the Tigers. Clemson still leads the overall series 2-1-1. Last year, Clemson upset seventh-ranked Boston College, 1-0 at Clemson’s Historic Riggs Field on November 4. Current Clemson sophomore Tommy Drake scored the game’s lone goal with 4:18 left to go in the match with assists by David Newton and Mark Buchholz.

“Boston College is a very good team and they played well tonight,” said Clemson Head Coach Trevor Adair. They thoroughly deserved the victory tonight. It was hard to adjust on the artificial turf that they are used to playing on at their home field. It was hard to find our feet on it. We just couldn’t get in a rhythm. But I’m not taking anything away from Boston College as they clearly deserved to win. They scored first in the first four minutes and we hung on through out the first half and into the second. Nathan Thornton got a red card in the middle of the second half and obviously we had to play with 10 men. We pushed forward to get the equalizer and it’s hard with a man down. They scored late in the game to make it 2-0. We have two home matches next week an hopefully we can end the regular season on a good note.”

Clemson will play host to Gardner-Webb on Tuesday, November 4, and USC Upstate on Friday, November 7, in the Tigers’ next action. These two games will be the final two regular season matches for the Tigers this season.