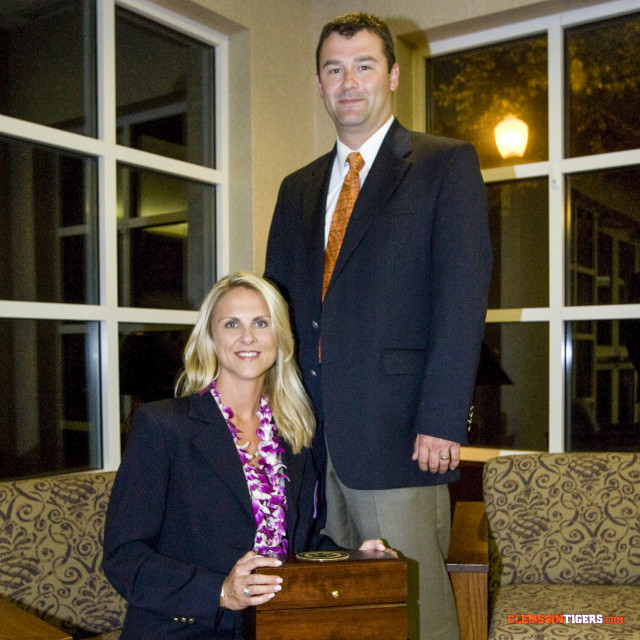 During her Clemson playing days (1994-98), she set and still holds the school record for assists in a career (40) and season (13). She was known for her unselfish play and being a big believer in the team concept.

“It didn’t matter to me who scored, I just wanted to help the team be successful,” said Bueter in an earlier interview. “Putting the team first is something I was taught and I always strived to do.”

Hauser was recruited to Clemson from Fairfield, Ohio for the school’s first-ever women’s soccer team in 1994. She entered her freshman season as one of the top recruits, and she did not disappoint. Hauser helped lead the Tigers to the NCAA Tournament during the inaugural year and ended that season with a record 13 assists.

Bueter was a starter on four NCAA Tournament teams, including the 1997 Elite Eight team. She also helped lead four teams to top-13 national finishes in the final polls. Hauser was also a member of the U.S. National Team in 1998.

“I’m glad that I was part of the early stages of the Tiger program at Clemson under two of the top coaches in women’s soccer, Ray and Tracey Leone. I also am delighted that I was alongside some of the best recruits in the country that had already committed to Clemson.

“I knew the struggles academically that could come with being a student-athlete, and Vickery Hall (Clemson’s former academic support center) gave me the confidence that I would be able to balance athletics and academics successfully.

“I have many memorable moments at Clemson. We went to the NCAA Elite Eight, and that was so special. I became Clemson’s career assist leader and I am very proud of that because that shows you are helping your teammates score. I am also ecstatic about being a member of Clemson’s Athletic Hall of Fame.

“Clemson is part of my family. While an athlete at Clemson, I felt like everyone’s daughter. They open their arms and hearts and embraced me as well as our new soccer program like I never could have imagined. Even though I have left campus, that feeling still lives on. I now take my children there and walk them through the history and introduce them to my Clemson family with pride.

Clemson’s program is one of grace and class. There are many things in life for which I’m proud of, and my decision to choose Clemson over several other Division I offers is one I’m most proud of.”

Her parents, Jerry and Loraine, were big supporters of her during her soccer playing days and would make several trips to Clemson to watch their daughter. They both fell in love with Clemson and joined IPTAY to help support the athletic programs.

Hauser and her husband, Scott, who played baseball for the Tigers, reside in Cornelius, N.C., with their three children. She is a general manager at High Line Health.